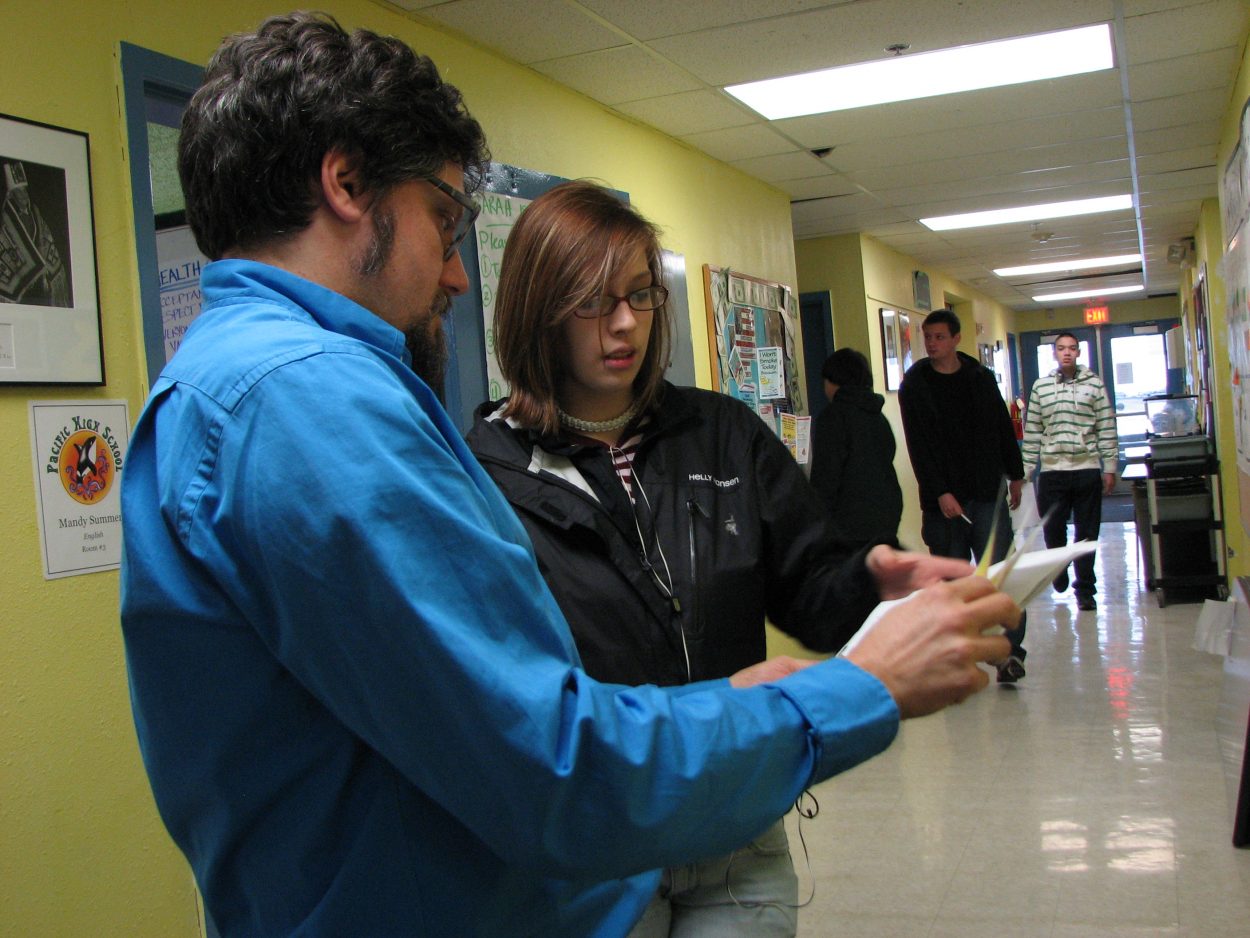 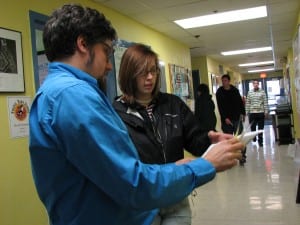 Pacific High co-principal Phil Burdick, on left, looks at work done by senior Rikki Biggs. The alternative high school is about to begin a yearlong renovation that will dramatically change the buidling's interior and exterior. (KCAW photo by Ed Ronco)

Plans to renovate Pacific High School include classrooms with moveable walls, a garden on the roof, and more common areas for students to spend time.

The Sitka School District unveiled plans earlier this week for the 30-student alternative high school. The renovations are funded, in part, by money voters approved during the 2010 municipal election.

School officials say the changes will not only improve the building, but also the learning that takes place inside.

Once a week, Pacific High School co-principal Phil Burdick calls everyone in the building together for a meeting. 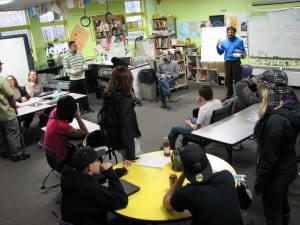 Students and staff gather for the all-school meeting, which happens weekly at Pacific High School. Co-principal Phil Burdick gives announcements, and then the students can discuss issues within the school. (KCAW photo by Ed Ronco)

The 30 or so students cram into one of the classrooms here, where they sit at chairs or on the floor, or on exercise balls. Burdick stands at the front of the room with a stack of flyers, announcing events, and then it’s the students’ turn.

One of the students suggests that they be allowed to play with hackey sacks in class again. Not yet, one teacher says, because one of the small beanbags hit a ceiling tile and spread dust all over his computer. Maybe after the break.

Another student, senior Rikki Biggs, mentions that she saw a segment on Good Morning America the day before about a coat drive, and by the end of the meeting, the students are talking about collecting coats and other winter gear for a local charity.

The All-School meeting is one of the ways Pacific High School differs from traditional schools. This is an alternative high school – a place for students who don’t learn the way most others do. A place for them to belong.

“There’s nothing worse than an alternative student being stuck in a traditional model. It is stifling. It is soul-numbing,” Burdick said. “Students who come here and buy into the program, and get excited about what they’re learning about realize that they can accomplish anything.”

The program is designed to meet those needs, but the building is not. As we walk around inside, Burdick points to water damage on the ceiling tiles. There are three square classrooms built for students to sit and listen all day, not for students to collaborate and work and move around – something the alternative education model demands. 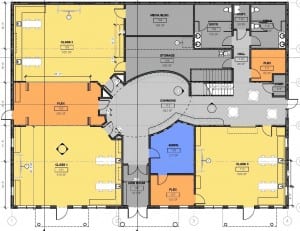 School district officials hope renovations scheduled to begin this summer will change that. The narrow hallway that cuts the building in two will disappear, replaced with an oval commons area. Classrooms will have walls that can open up to join them to each other. And the kitchen, where lunch is prepared fresh every day, will move next door, to the Southeast Alaska Career Center. Burdick said students can learn cooking skills in the current kitchen, and graduate with a food handler’s card.

“We’d like to grow the program, too. There’s an entire career and tech-ed strand around culinary arts,” he said. “Right now we’re staffing it with AmeriCorps volunteers. Lauren is fabulous, but she is only one person and she is a volunteer.”

The plans for the remodel were approved by the Sitka School Board earlier this month, and also were presented to the Sitka Assembly. The city owns the school buildings. Some Assembly members have been lukewarm on the idea of renovating the school. Pete Esquiro asked whether the district has considered building the school at another site. Superintendent Steve Bradshaw told him the idea was discussed, but that renovating the building entitles the district to state money.

The State of Alaska is picking up about two thirds of the $2.2 million bill.

Assembly member Terry Blake thought the amount – which works out to roughly $440 a square foot – sounded steep. And the Assembly had questions about the timeline. Does this need to be done right now? Bradshaw told the Assembly that the district did not embark on the project lightly.

“Believe me, I understand what $2.2 million is,” Bradshaw told the Assembly. “But that’s why we took it to the taxpayers of this community – to say ‘Are you willing to spend this?’ The taxpayer said ‘Yes, we’re willing to spend it and we’re willing to back it.’ To me, it’s critical to keep moving on this, because we would like to get it done. Is a timeline going to impact us? No. If this Assembly says ‘We need you to back off,’ we will listen to that. I’m not sure we will agree with it.”

Burdick says he’s aware some people might consider the remodel a waste of money, but he says $2.2 million dollars is a small amount to improve a program that he believes ultimately helps the taxpayers.

“Our students stay in Sitka. They get a better job, they pay more taxes,” he said. “If we have high school dropouts who can’t get a job and have to be on welfare, then they pull from the tax roll.”

Biggs, the student who wanted to start the coat drive, says the renovation has been discussed since she was a freshman.

“And we talked about it for a really long time,” she said. “None of us thought it was going to happen. I’m a senior now.”

The students wrote letters to politicians, talked with architects about what they wanted to see in the new school, and hoped it would actually happen.

“It’s pretty awesome,” she said. “I’m happy, even though I’m not going to be here, I’m really happy that it’s happening.”

And she hopes that a new building will help foster the same sense of community she’s felt in the last four years at Pacific High.

“We’re all close. All of us. We don’t have our own cliques. We all hang out with the people we like the most, but we’re all pretty much friends,” Biggs said. “If you look at the lunch line, everyone’s cool with each other. We’re all talking. It’s been really nice to have everybody care about someone. If one person’s not here, everybody’s like, ‘Where is that person? Why are they not here?’ We try to call that person and see why they’re not in school. It’s cool.”

Bids on the Pacific High School renovation are scheduled to go out in the spring, with work to begin soon after. The hope is that the work will be done by this time next year.