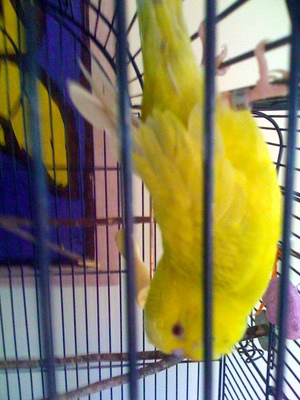 Mr. Tino may enjoy hanging out upside down, but at least he’s got good taste in radio stations. The talking parakeet lives in the Washington, DC, home of former KCAW program director Marika Partridge, who’s spent the past several months preparing for this summer’s Raven Radio 30th Anniversary Celebration. Listen to the clip below and you’ll likely agree: Mr. Tino’s got the chops for radio!
Click here for iFriendly audio.
Mr. Tino’s voice was featured on the Dias Corvidae radio program hosted by Partridge on Thursday (7-5-12).