Ferry changes due for some Southeast cities 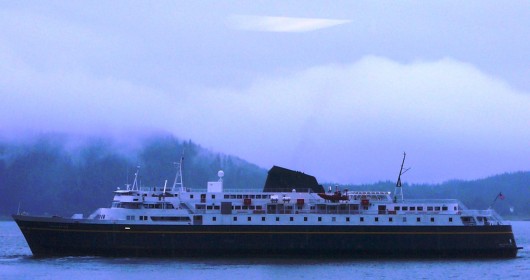 The Ferry Malaspina pulls out of Auke Bay harbor Aug. 3 on its way to Haines and Skagway. A new draft ferry schedule would change its summer sailings.

This year’s summer ferry season has more than a month to go. But the marine highway has already drawn up next season’s sailing plan.

Officials are distributing copies of a draft schedule and taking comments through later this month.

Lynn Canal dayboat service is among the changes. Ferry chief Mike Neussl says next year, the Malaspina will sail roundtrips six days a week from Juneau.

That’s one more than this year, which included two half-day, half-way trips, with the night spent in Skagway.

“That didn’t really go over very well with the communities of Haines and Skagway. And it got away from the true dayboat concept of that ship running the same route virtually every day,” he says.

Last year, the Malaspina overnighted in Skagway, sailing daily to Haines and Juneau and back.

“We found when the ferry was homeported in Skagway for those three years – 2009, 2010 and 2011 – that was a very inconvenient schedule for people who wanted to travel through the region,” she says.

Next summer’s schedule also makes changes to the Juneau-based LeConte’s schedule. Some will clear space for other ships to dock at the capital city’s Auke Bay terminal.

The small ferry will add an overnight stop in Pelican every other week. Neussl says it will save on overtime and improve service.

“So instead of leaving Pelican and getting to Juneau in the middle of the night, you can leave Pelican in the morning and get to Juneau in a reasonable time. A lot of people come here to do shopping or business or whatever, so hopefully that will facilitate that and make it easier,” he says.

The LeConte will also overnight weekly in Angoon, adding to the village’s twice-a-week Fairweather port calls. Hoonah will continue getting a weekly overnight LeConte stop.

The small ferry will continue sailing to Gustavus, a recent port addition. But the schedule will change.

“It’s similar. It’s not identical. There are some minor changes to that and that’s based on the changes that we had to make with the LeConte serving a variety of different ports. Still good service to Gustavus but slightly different service than what it is this year,” he says.

The Juneau-based fast ferry Fairweather will remain on the same schedule to Sitka and Petersburg as this year. It will run four days a week in May and June, then seven days a week in July.

“That’s really a cost-savings measure. It’s expensive to operate that vessel and the traffic volume in May and June hasn’t quite ramped up to yet to warrant seven days a week,” he says.

Like all seasons, some schedules will vary as ships are tied up for overhaul and repairs.

The Columbia, which connects Southeast to the Lower 48, will get new engines that fall. Neussl says that that will kick off a schedule shuffle.

“So in September of 2013 the Columbia will go out of service basically a month before it typically does. And the Malaspina will shift from being the northern Lynn Canal dayboat to actually doing the Bellingham run in place of the Columbia. And the Taku will shift up to fill northern Lynne Canal,” he says.

The draft 2013 summer ferry schedule information is available online. Comments are due prior to August 28th. That’s the day officials will hold a teleconference to hear suggestions from community leaders and passengers.

A teleconference to hear comments and consider adjustments is scheduled for Tuesday, 10 a.m. August 28 for Southeast Alaska schedules and 1:30 p.m. for Southwest and Southcentral Alaska schedules. The meeting will be held in Ketchikan at the Port Engineer’s waterfront office, 3713 Tongass Avenue for participants wishing to attend in person.