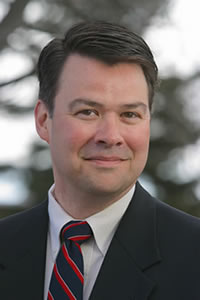 A Democratic hopeful for Congress made his way through Southeast this week, including a stop in Sitka. Matt Moore is a 52-year-old former North Slope worker who now manages medical practices.

The Anchorage resident is one of five people in a crowded Democratic primary for Congress. Other Democrats on the Aug. 28 ballot are state Rep. Sharon Cissna of Anchorage, Debra Chesnut of Fairbanks, Doug Urquidi of Eagle River and Frank Vondersaar of Homer.

Click here to learn more about all the candidates.

One of them will likely face Congressman Don Young, a 20-term Republican, and Jim McDermott, a Libertarian. (Young also has some primary challengers: Terre Gales of Eagle River and John Cox of Anchor Point.)

Moore says he knows the odds of unseating Young are long, but that he has reasons for running.

“One, it gives people a choice. And second, if people have gotten to the point where they’re tired of this sort of representation, or in this case maybe misrepresentation, there’s another option that’s out there for them. You aren’t going to have to choose between the lesser of two evils. You can find someone that’s articulate, intelligent, someone that’s actually rooted to the state, and someone who plans on being here for the rest of their life, which is me, to represent them. I would say yep, that’s pretty good. My odds of beating him? We’ll have to see. If I make it through the primary, and if he’ll show up and we can go on and start debating, I think everyone will see the difference. I think the table will turn very quickly.”

Like many candidates for office in Alaska, energy needs comprise a large portion of Moore’s platform. He says he’d work to open up the Arctic National Wildlife Refuge, or ANWR, for oil development. He says he would do that by talking to other Democrats who have been opposed to ANWR development and convincing them to change their minds. We asked him, “how.”

“The way to do that, really, is to start forming relationships with other politicians in Washington as quickly as possible, find the ones that are absolutely 100 percent against it, talk with them about it and actually bring them up here and show them what we’re talking about, and really what the benefit is for our state. When I look at it on a nationwide basis, we could actually get cars that have better gas mileage, put those in place, have people start riding bicycles once or twice a month, and we could actually offset what we’d be able to produce in ANWR very easily. But right now we can’t. We don’t seem to have the political will in our country to be able to do that.”

Opening ANWR, he says, is important to jobs in the state, and to the state’s economy. Alaska’s state budget is fed largely by oil revenue. Moore also says, though, that he values the pristine parts of Alaska, and wants to see those maintained.

Closer to home, we asked Moore about the Sealaska lands selection legislation. Two bills in Congress would convey land to the regional Native corporation. The version sponsored by Sen. Lisa Murkowski, has undergone a series of changes based on hearings and public testimony. The House version, sponsored by Young, has remained largely unchanged.

“In this particular case, yes, there should be some compromises that are made. They should have the opportunity to go out and look at other parcels. The big question is, is it just a trade of land for land that’s been used up, such as logged, for land that could potentially have a logging value to it. If it’s nothing more than that, that’s going to be a real problem, that’s going to be a hard pill for everyone in Southeast to swallow. If it was something more than that, I think people could look at it a little bit differently and be a little more supportive of it.”

Click below to listen to the entire interview. (iFriendly audio)