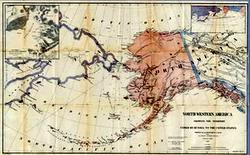 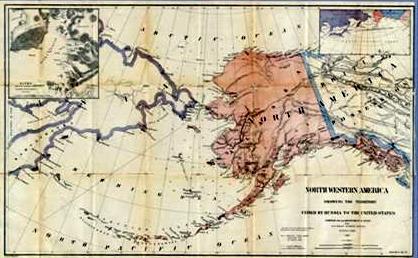 The map the Coast Survey prepared in 1867 still referred to Alaska as “Northwestern America.” (NOAA/National Archives)

“Aha moments” probably come more often in the sciences than in social studies, but every once in a while an historian makes a find that changes everything.

Recently, a researcher combing through the National Archives made just such a discovery. In this case, while working on a project to scan some of the very first maps of Alaska, he learned how early cartographers so accurately depicted places they had never been.
Listen to iFriendly audio.
John Cloud works for the National Oceanic and Atmospheric Administration in Washington DC and – despite his made-to-order name – is not in the National Weather Service. He’s a contract historian who says the luckiest assignment he ever took was digging into the National Archives seven years ago to retrieve early maps of Alaska made by the Coast Survey, the progenitor of NOAA.

“There was all these patterns that emerged about Alaska mapping. The Coast Survey was really critical to the invention of Alaska, and the purchase of Russian America.”

The patterns Cloud’s talking about refer to the level of detail in the Coast Survey maps of a place Americans really didn’t know that much about. In fact, those first maps don’t even call it “Alaska.” They’re labeled “Northwestern America.”

Then he found it.

“I had no idea what it was, but it was nothing like anything I’d ever seen in the archives.”

It was a set of pencil-and-paper drawings – a mosaic, of sorts – that together formed a map, drawn by a Klukwan Tlingit. 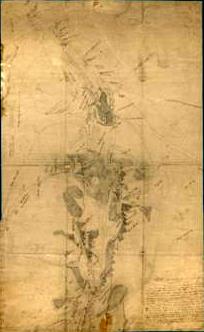 A mosaic made from maps drawn by Shotridge and his two wives. (NOAA/National Archives)

At the time, Cloud did not understand his luck.

“I will say I have a good eye, and I scanned a lot of things that I didn’t know anything about, but as soon as I saw them I thought they were interesting. And these included stumbling upon the incredible map done by Shotridge and his two wives for George Davidson in 1869 in Klukwan up the Chilkat River, and the five maps drawn by the Inupiat Joe Kokaryuk in 1898 for the Coast and Geodetic Survey in the lower Yukon Delta.”

Two Native mapmakers, a generation apart, provided the Coast Survey with information on thousands of miles of river and coastline. The Tlingit Kohklux, better-known as Shotridge, and the Inupiat Joe Kokaryuk. Their stories have some parallels, so to speak.
In 1867 George Davidson ran the Coast Survey on the west coast out of an office in San Francisco. If you compare the map his agency produced for the transfer of Alaska in 1867, against the map made by the same office only two years later, the new detail in the northern panhandle is extraordinary. John Cloud says the cartographers of the Coast Survey were scientists first and foremost, and that they often sought out indigenous sources to fill in critical detail in their maps.

The Tlingit, however, are characterized by a rich protocol surrounding intellectual property rights. The kind of information Davidson needed was really not available for the asking – but it could be exchanged. By coincidence, Davidson learned that a solar eclipse would be visible in Southeast Alaska in 1869, with the track of the full eclipse plotted right through Klukwan. Davidson steamed north to await the eclipse, and observed it through a modified telescope with Shotridge. This was the breakthrough that cartographers were waiting for.

The head of the Coast Survey, George Davidson, traveled to Klukwan to view a solar eclipse.

“And in the aftermath of that eclipse, there was this intellectual potlatch, where Davidson made a painting of the eclipse in its totality as he’d seen it in his special telescope. Shotridge and his two wives made a series of maps of the geography up and over the mountains – the ancient trade routes of the Tlingit – all the way over and down to the main stem of the Yukon River. And then, the two parties exchanged the painting of the eclipse and the map.”

So the 1869 Shotridge map was one of Cloud’s discoveries in the archives, as was the map of Alaska’s far north coast drawn 30 years later by Joe Kokaryuk. Cloud wondered – and you may be thinking by now – how did they do it? How does someone with no training in cartography – no training in using pencil and paper, for that matter – produce a map so accurate that is incorporated to the official record of a nation? 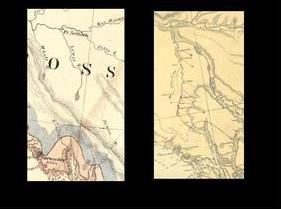 The 1869 Coast Survey map of Alaska included detail of the Chilkat Valley provided by Shotridge and his wives. (NOAA/National Archives)

Cloud says we’ve got to think beyond the paper.

“That’s the whole question: Where is the Map? Is the map the thing that’s put down on paper, or is the map the thing that’s put down on your head in the first place, that’s then presented on paper? Or is sketched in a mudbank? In the case of Joe Kokaryuk, that’s how they noticed: He was making little sketches on a mud bank for other Eskimos. He was the interpreter and the expediter of the Coast Survey party on the lower Yukon delta, and they could see that he was good at it. They said, Hey, how about we give you some paper and a pencil? Literally. Very much the same situation – a generation later – as Shotridge and his wives. But, again, the map – in both cases – if it hadn’t been in their heads in the first place, how could they possibly have put it down on paper?”

One of five maps drawn by Joe Kokaryuk in 1898, showing the coastline between St. Michael and Pt. Hope. (NOAA/National Archives)

Locating the original map sets by Shotridge and Joe Kokaryuk was a great find – of many – John Cloud made while searching the national archives. But one mystery remains. So much of Alaska was opened to view because an early mapmaker, George Davidson, followed an eclipse and made a painting of it, which he mounted on the back of a Chilkat blanket pattern board. A copy survives in San Francisco, but the original has never been found.

John Cloud is not discouraged.

“All you have to do is go around the world to wherever there are Chilkat Indian pattern boards and turn them over, because they only used one side. If you turn over enough of them, you’ll finally turn one over and there will be the eclipse painting.” 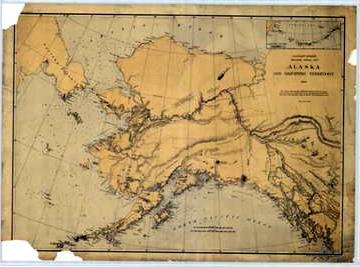