Thomas: I’ll still have a Finance seat if I win

Haines Republican Representative Bill Thomas says he’ll still have a seat on the House Finance Committee if he picks up enough votes to win the election. 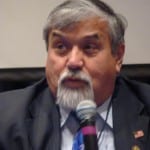 Thomas is 44 ballots behind Sitka Democrat Jonathan Kreiss-Tomkins. Both candidates are waiting for counts of absentee and questioned ballots to determine the winner.

In an interview with KHNS radio in Haines today, Thomas said he’s caucusing with other House Republicans at the Alyeska Resort, near Anchorage.

He confirmed he lost the committee’s co-chairmanship, a position he held for the past two years. But he said, quote, “They’re saving me a seat on finance.”

Thomas served on the powerful budget-writing committee since 2007.

There’s no word yet on House Democrats’ organizational plans, or where Kreiss-Tomkins would fit in if he holds his lead.