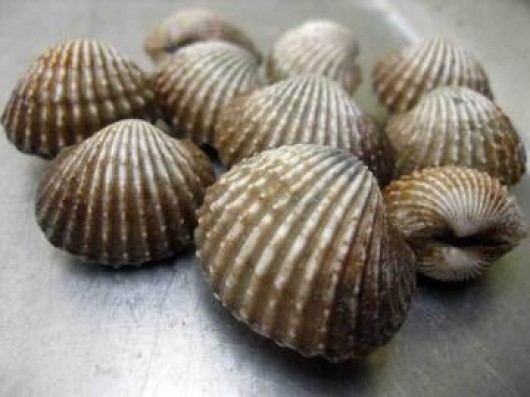 Cockles, a type of clam common in Southeast Alaska. A widely-read magazine incorrectly reported cold water temperatures could prevent PSP in the clams. Photo courtesy the state Department of Health and Social Services.

State officials say a magazine article about shellfish incorrectly states when they can be gathered safely.

Alaska Magazine’s December-January issue includes a first-person story about collecting cockles, a type of clam, on shores near Juneau. It includes a warning about paralytic shellfish poisoning. But it says cockles can be dug safely in late fall and winter, because colder water keeps PSP-producing algae from blooming.

“There are no safe months. PSP can occur anytime. And the only way time you would know is to test it and to have the lab analyze the animal,” he says.

The departments of Environmental Conservation, and Health and Social Services, say only commercially-grown shellfish is considered safe.

PSP can cause loss of arm and leg control and make breathing difficult. It can kill a person in about two hours.

Alaska Magazine could not be reached for immediate comment.

Paralytic shellfish poisoning can be found in clams, mussels, oysters and scallops. Crabmeat is not known to contain the toxin, but crab guts can.

“We certainly don’t want to discourage anybody from going out there are having their right to recreational harvests. But we just want folks to know that safety is really important and we want people to be aware of the risks when they do this,” Keltner says.

Here’s where to to earn more about PSP and shellfish safety: