As the Gurdy Turns 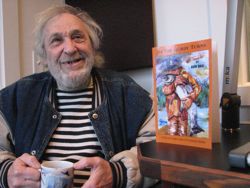 Ron Rau has been trolling in Southeast Alaska for thirty-five years. He started in a sixteen-foot skiff near Wrangell, when literally anyone could become a hand-troller for the price of a $50-permit. Over the course of his fishing career, Rau often published articles in the Alaska Fisherman’s Journal. He’s now collected those essays in a new book called As the Gurdy Turns. Listen to iFriendly audio.