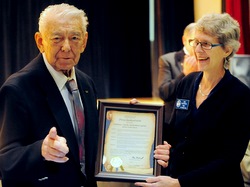 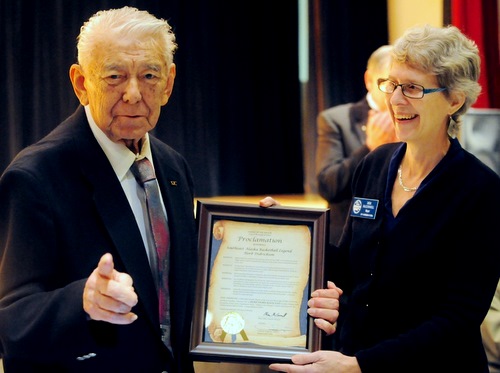 Lifelong Sitkan and basketball star Herb Didrickson was honored at a sold-out banquet in Harrigan Centennial Hall on Sunday (2-24-13). On February 26 Didrickson and Buck Nystrom, the winningest coach in Alaska football history, will be inducted into the Alaska Sports Hall of Fame in a ceremony at the Anchorage Museum. According to his peers, Didrickson was in a class by himself on the basketball court, playing for Sheldon Jackson School in the years before WWII, and then for the ANB in the postwar period. His friend Gil Truitt, who led the campaign for Didrickson’s induction, says that Herb’s speed, dunking ability (though it was not allowed at the time), and menacing defense created a player “thirty-years ahead of his time.”