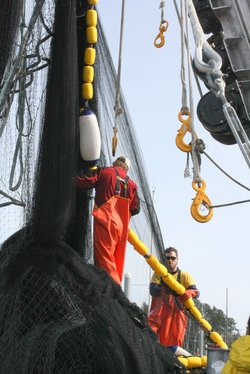 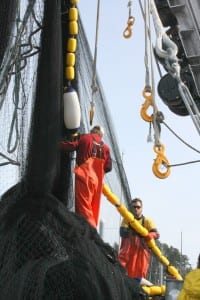 Crew aboard the Sitka-based F/V Pillar Bay tend to the net after the closure of the 2012 herring season. (KCAW photo/Ed Ronco)

Lots of whales, not a lot of herring. Not yet, anyway.

That’s the report from the first aerial survey of the 2013 herring season in Sitka Sound. Alaska Department of Fish & Game officials found 24 whales in the Sound, mostly between Kruzof Island and Crow Island, and offshore of north Middle Island.

Sea lions were spotted off Mountain Point and Inner Point.

The locations of the predators suggest to state officials that herring are most concentrated in the trenches north and west of Middle Island. And they say that’s normal for this time of year.

All the build-up is in anticipation of Sitka’s commercial herring fishery. The fish caught in Sitka are used primarily for their roe, which is sold in Japan still in the egg sac. The fishery itself has been incredibly lucrative in the past for fishermen, although last year’s catch wasn’t as big as expected.

Officials expect to take a sample of fish on Monday. They’ll monitor the percentages of mature roe in the fish in order to determine when the fishery should open.