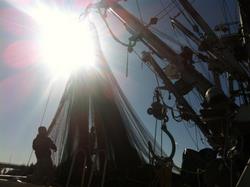 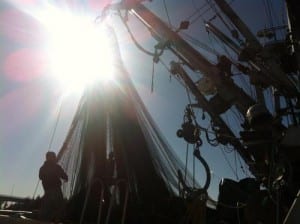 Crew members aboard the Hydaburg-based F/V Pacific Fisher tend to the net on Wednesday afternoon. The commercial herring fleet is in Sitka waiting for the opening of the 2013 sac roe herring fishery.  (KCAW photo by Ed Ronco)

The Sitka herring fishery goes on two-hour notice Monday at 11 a.m. The announcement came Friday from the Alaska Department of Fish & Game. It means if Fish & Game calls an opening, the fleet has at least two hours to make it to the location of the fishery.

But what prompts the two-hour notice?

“Basically, it’s by weight,” Gordon said. “The percentage of eggs versus the total weight of the fish.”

Here’s the quick version of how it works: A fishing boat takes a sample catch. They weigh all the fish (males and females) and then they start to extract the roe. Let’s say the sample is 100 tons. You extract the roe, or eggs, from the herring and look for the ones that are developed. Those are called “mature roe.” And if you find, among that 100 tons, if you find 8 tons of mature roe “then it’s an 8 percent sample, basically, for mature roe,” Gordon said.

The fishery goes on two-hour notice as the percentage of mature roe starts creeping up toward 10 percent.

“You get below 10 percent and the cost of handling and processing versus the roe recovery — it just isn’t profitable,” he said.

But it’s tricky, too. The fish are valued for their roe, still in the sac, which is sold as a food item in Japan. The higher the percentage of mature roe, the higher the price fishermen get for their catch. But if they wait too long, the fish spawn — they eject their eggs — and the commercial fishery is over.

That could be an expensive problem. Prices for herring this year aren’t really known yet.

“I understand the price is going to be good, so I expect it to be as good as last year,” Gordon said.

Sitka herring brought in about $640 a ton last year. That puts the 2012 fishery’s value to fishermen at about $8.5 million ex-vessel.

Of course, the Sitka herring fishery is about more than a calculation of mature roe or ex-vessel value. It is the subject of documentaries and, for many, the sign spring has begun. And it also has its critics.

Subsistence gatherers of herring roe have argued in years past that the state’s quotas are too high. This year’s quota is just over 11,500 tons — the lowest since 2006. But last year, the quota was nearly 29,000 tons. The fleet caught less than half of it before the fish were too far gone.

ADF&G will hold a meeting for fishermen, processors and others at Centennial Hall at 2 p.m. Monday. The state research vessel Kestrel also will arrive Monday. Test sampling will resume Tuesday.