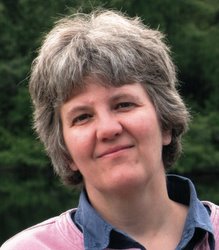 Michelle Bonnet Hale is the director of the Division of Water for the state Department of Environmental Conservation.

The top state official in charge of water quality says cruise ships have cleaned up their act considerably over the last fifteen years.

Michelle Bonnet Hale is the director of the Division of Water for the Department of Environmental Conservation. She spoke to the Sitka Chamber of Commerce on Wednesday (5-15-13)

Hale was on the road to assure the public that a controversial bill passed this spring by the legislature would not impair the state’s ability to ensure that cruise ship wastewater met quality standards.

HB 80 repealed several of the regulations placed on cruise ships by the public in a 2006 citizen initiative, and allowed water samples to be taken in mixing zones behind ships, rather than at the point of discharge.

Hale told the chamber that the cruise industry had already begun to upgrade its sanitation technology in 2004, following several high-profile pollution cases involving fecal coliforms. She said “the initiative addressed a problem that had already been solved.”

She said the state’s remaining concerns were the levels of ammonia, copper, nickel, and zinc.

Here’s an excerpt of her remarks on copper:

In 2003 researchers in the state of Washington found in one study (that they’re trying to replicate now) that copper at low concentrations in freshwater had an impact on juvenile salmon’s ability to smell – called their olfactory capability. And we know how important that is because it’s their ability to smell that gets the fish back to their streams and rivers of origin. So it’s a very alarming study. Researchers pointed out that additional research was needed, and that this study couldn’t be extrapolated to salt water. So additional research in salt water was needed. In salt water there are a couple of things that happen: One, fishes’ bodies change when they go from fresh water to salt water. Their physiology changes, the way they take things in changes. And the second is that freshwater, especially in a place like Alaska, is a very pure water. And saltwater is simply not pure – there’s a lot in it. That also has an effect on what happens to the copper. So, recently there’s a draft study by those same researchers on the effects of copper in saltwater on fish. Those same researchers found that the effects on fish of copper in saltwater happen at about 50 times the concentration that it happens at in freshwater.

Hale is a chemist by profession, and a lifelong Alaskan. She told the chamber that her staff knew how to protect water. “We have the tools,” she said.

Listen to Hale’s full remarks to the Sitka Chamber of Commerce.

There is a significant amount of opinion – even in the scientific community – opposing Hale’s assessment. Read previous reporting on the issue, and an opposing scientific opinion.