The opinions expressed in commentaries on Raven Radio are those of the author, and are not necessarily shared by the station’s board, staff, or volunteers. 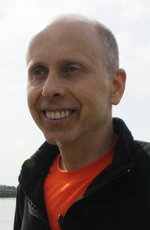 My son, David, and I will run across America in 2014 to raise awareness of genetically modified organisms.

When I tell people about Monsanto and genetically modified foods or GMOs, the most common response I hear is, “What’s Monsanto?”

Monsanto is a multinational corporation based in St. Louis, Missouri. Prior to the year 2000, Monsanto was best known for its production of PCBs, DDT, and Agent Orange, products Monsanto declared safe long after their own employees’ ill health and premature deaths proved otherwise.

Monsanto and other biotech companies make genetically modified seeds by forcing the genes of unrelated species, most often bacteria and food plants, together through crude and imprecise methods. U.S. law allows these unnatural creations to be patented.

Monsanto licenses their patented seeds to farmers the same way a software company licenses software to computer users. If farmers save and replant licensed seeds the way they’ve done for thousands of years, Monsanto sues these farmers and wins in court.

So what? Why should Sitkans care about farmers, lawsuits, pesticides and GMOs? Here are 5 good reasons:

1. GMOs have resulted in increased use of pesticides. Pesticides are poisons. Farmers wear hazmat suits when they spray the poisons on the plants you feed your kids. Pesticide poisoning results in reproductive issues such as infertility, miscarriage, birth defects, and various cancers.

2. The process of genetic modification produces massive collateral damage to the plant cells which results in unpredictable and potentially lethal results. 1,500 people developed serious illnesses and 37 died in 1989 after ingesting the genetically modified food supplement, L-Tryptophan.

3. Key Monsanto and government personnel routinely swap offices, passing through what is known as the revolving door. Naturally, this makes our government pro-biotech. A pro-biotech government is far more likely to approve genetically modified salmon than a pro-citizen government.

4. Pesticides and GMOs kill bees. The EPA approves bee-killing pesticides banned in the EU. Einstein said “If the bee disappeared off the face of the earth, man would only have four years left to live.”

5. Most of us eat GMOs and we don’t know it because our pro-biotech government refuses to label GMOs, even though they are labeled or banned outright in over 60 countries including China.

Monsanto and GMOs may be one of the most important concerns facing Sitka, the USA, and the entire world. Sitkans are meeting at 7 p.m. May 25 at Centennial Hall to learn more about Monsanto. And Sitkans will meet on Castle Hill, May 25, at 2 p.m. to participate with over 300 other cities in a global March Against Monsanto.

Commentaries are a listener service of Raven Radio. If you’re interested in adding your voice to the mix, click “Contact Us” in the orange bar above, and send a message to our news department.