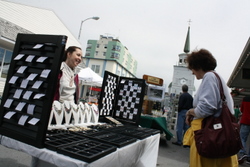 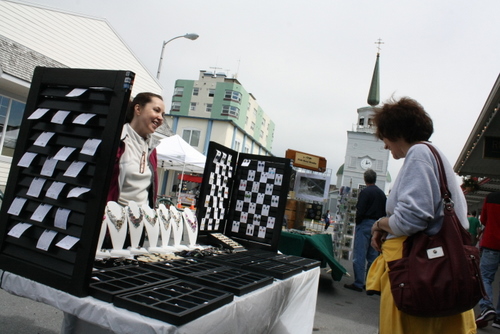 Sitka artist Kiki Norman talks with a visitor from behind her table, set up on Lincoln Street during Wednesday’s temporary street closure. A group organized to revitalize Sitka’s downtown plans to close a block or so of downtown to vehicles for on three additional Wednesdays. (KCAW photo by Ed Ronco)

Part of downtown Sitka was blocked off to vehicle traffic on Wednesday. It’s part of an experiment to see if portions of Lincoln Street might operate well as a pedestrian mall when cruise ships are in town.

Although the closure wasn’t well advertised, it’s long been on the minds of a group interested in revitalizing Sitka’s main street.

CLICK TO ENLARGE: A map of the closure area.

Her chair, and a table displaying her artwork, are in the street, which is closed to vehicles in this block. Others artists and vendors are also displaying their work out here, in hopes of attracting tourists willing to buy.

Susana Schwarz is visiting from San Juan, Puerto Rico. She approaches a display on Elstad’s table. She doesn’t buy anything, but she says she really likes having all the vendors out on the street.

“It seems to me they have a variety of things here and they have some local artisans working as well,” Schwarz said. “It’s much better. People are going to see more things. They’re going to be more attracted.”

Having the street closed to vehicles, and the vendors set up outside, is an experiment being conducted by Sitka’s Downtown Revitalization group, which formed after a health summit last fall. Improving the look and feel of Sitka’s downtown was chosen as one of the summit’s goals.

“For a couple of reasons,” she said. “One is to encourage more time in the downtown area, and more shopping. When you have more of a unique one-of-a-kind experience when you’re traveling, you’re more inclined to maybe shop for something a little more expensive, or a little more meaningful.”

Gibson says the feedback she’d received as of midday Wednesday was largely positive — that vendors were excited to be outside in the sun, and that they were seeing more visitors than had they stayed indoors.

That said, it’s not a perfect system yet. Tour buses had to be rerouted, and despite a letter to the editor in the newspaper announcing the dates, the closure of this block-and-a-half wasn’t heavily advertised.

“I’m getting a lot of feedback that it was a surprise to a lot of people, so we didn’t do a good enough job on that, and I do apologize to people on that,” she said. “We are going to work really hard this next week to let people know the future dates. There are just three more Wednesdays…”

The next three, in fact: June 19, June 26 and July 3. Elstad, back at her table in front of the Baranof Island Artists Co-op, says that’s fine with her. As the bells at nearby St. Michael’s Cathedral begin to mark noon, she says she’s kept plenty busy.

“Being able to interact with the people and being able to see what we’re doing, and being out on the street has increased our sales for the day,” Elstad said. “It absolutely makes a difference.” 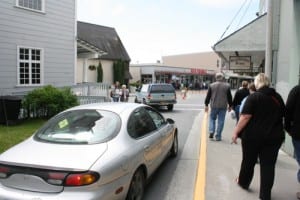 Traffic makes its way around St. Michael’s Russian Orthodox Cathedral, avoiding an area of downtown designated as pedestrian only for part of Wednesday. The closure is part of an experiment to see if a pedestrian mall will boost business and visitors’ experiences. (KCAW photo by Ed Ronco)

Behind the church, of course, there’s another half of downtown, where the street is not closed.

Ruth McMaster runs WinterSong Soap Co. from a storefront here, and Doug Dabrowski is next door selling jewelry from his business, Eclipse Designs.

“It’s really quiet over here, and then we walk around the corner and there are hundreds of people, but they don’t really seem to make it past the church,” Dabrowski said. ”

McMaster added: “And there’s more to town than just that side of the church.”

Both say closing the street isn’t a bad idea, but that they wish all of downtown could be included, even if it can’t happen all at once.

“If they could,” McMaster said, she’d like them to “trade off and have this be a closed section as well, and maybe have the buses not drop off at that end of town.”

Gibson says the Downtown Revitalization Group plans to have meetings to figure out whether closing Lincoln Street worked, or at least how to improve it. One of the goals, in addition to boosting commerce for downtown merchants, is to attract tourists back to Sitka for a longer stay than the few hours of shoretime they get from a cruise.

That sounds ideal to Susana Schwarz, the visitor from Puerto Rico:

“I usually don’t go on cruises,” she said. “I like to stay in a town for a night or two nights, then go to another place. That’s what I usually would do.”

The Sitka Convention and Visitors Bureau has an unmanned table set up with brochures, and cards telling visitors how easy it is to get back to Sitka. Schwarz says it might not be a bad idea, out here on the street among the artists and food vendors, to add a few travel agents, too.