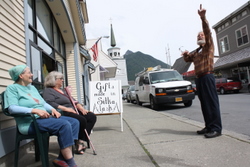 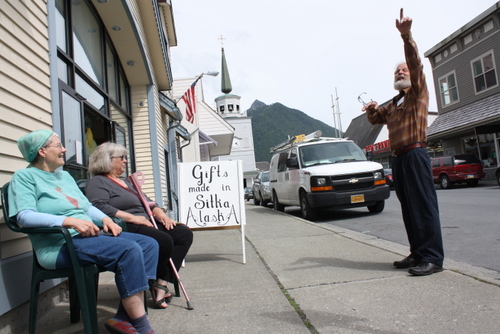 Jude Reis and Pamela Ash (left) talk with Stan Schoening outside the Baranof Island Artists’ Cooperative on Wednesday afternoon. A plan to close this stretch of Lincoln Street to vehicles was canceled by the Sitka Assembly at its regular meeting on Tuesday. (KCAW photo by Ed Ronco)

A plan to close parts of Lincoln Street to motor vehicles on certain days is dead, at least for this summer.

The Sitka Assembly voted Tuesday to uphold a suspension of the pedestrian mall plan, after the first street closure brought controversy and public complaint.

This story begins on June 12, in front of St. Michael’s Cathedral.

A group of volunteers trying to revitalize Sitka’s downtown got permission from the police department to block off part of Lincoln Street. The New Archangel dancers performed and some artists and merchants put their wares on display on tables.

But not everyone was excited about the plan. Motorists complained about the detour. Some residents said they were not adequately warned about the closure. And some business owners outside the closed area said traffic was diverted away from their storefronts.

So a few days later, the city suspended the closures until the Assembly could talk about it. About seven people testified to the Assembly on Tuesday.

“Advocates for pedestrian, or walk-friendly, communities say that a sidewalk has to have three zones,” Sitka resident Rich McClear said.

One zone is close to the buildings for chairs and benches and window shopping. Another zone is for traveling — walkers, wheelchairs, etcetera — and a third zone contains garbage cans and light poles and other fixtures.

“It’s impossible to get those three zones on the sidewalks in Sitka right now. It’s just impossible,” McClear said. “And without having that first zone close to the window shopping, I think it impedes the ability of people to look at stuff and buy things, to spend time pondering, without blocking traffic.”

McClear said he favored the closure, because it meant more room for users of the street. He also suggested just closing the street to parking, instead of traffic altogether.

Resident John Welsh said he knew it wasn’t perfect, “but it brings the community to the downtown. It possibly creates businesses and makes it more exciting downtown. What I saw was very favorable and positive. I’d ask you to support and continue experimenting with it, not completely shut it down.”

On the other hand, there were some concerns. Sitka Lutheran Church Pastor Sandra Rudd said her congregation has concerns about access to the church, especially for worship services, weddings and funerals.

“Worship services and weddings are pretty predictable. Funeral services are not,” she said. “I would hate to have to say to a grieving family, ‘I’m sorry, but we can’t have the service on the day you’d like, because the street’s closed.’”

Mary Stephenson said she wanted more clarity in the plan: What happens after the trial period?

“Also, what is the success?” she said. “What are we (using to) measuring the success or the failure of this? It’s a success in the 100 and 200 blocks for the merchants, but it’s a failure in the 300 and 400 block because they got totally cut off.”

Then it was the Assembly’s turn.

Thor Christianson: “I think it was worth a try. All things being equal I’d probably be able to try it again, but there seems to be some heartache about it, so we should probably figure it out for next year.”

Matt Hunter: “It could work. I think it’s worth giving it one more try. That’s the way you improve something. You try and you recognize parts that failed and parts that succeeded, and you adjust and you try again.”

Phyllis Hackett: “I like the idea of it being closed permanently. So that’s the extreme I come from. But I’m not really talking about me. I think I’ve gotten a lot of comments and I could say it’s pretty well 50/50 of people liking it and people not liking it. And that’s fine.”

“I don’t know that the group is married to any particular idea of how this revitalization looks, but the one thing I do think is that the group is very interested in trying ideas, and looking at how we can make improvements downtown,” Osborne said. “One thing where I think there’d be consensus is that the status quo in our downtown is not working and that improvements needed to be made.”

Hackett and Hunter voted to continue the street closures. Pete Esquiro, McConnell, Christianson and Mike Reif voted to end them for 2013. Michelle Putz was absent.