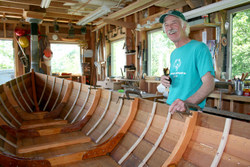 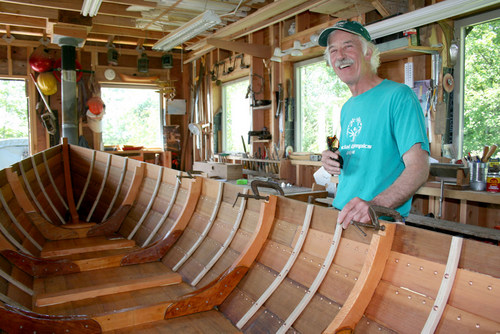 Sitka’s rich history of wooden boat building began with the sturdy, ocean-going dugout canoes of local Natives, and peaked in the early 20th Century, when the harbors were filled with wooden trollers, seiners, and seal boats. 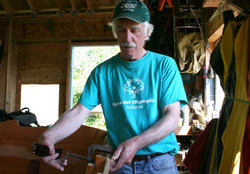 Howey clamping a rib to the sheer strake of his boat.

Since then, wood has all but been replaced by fiberglass, steel, and aluminum, and it’s easy to think about wooden boats more as museum artifacts than as functional watercraft.

But Sitkan Mark Howey sees wooden boats differently. He’s built two small skiffs in his backyard shop, and a third is on the way.

“This is a Lowell dory skiff. It’s 14 feet plus long,” Howey said. “It’s going to have two rowing stations. And, I don’t’ think we’re going to sail it. I would have liked to sail it, but the shop is too narrow. It’s already way too full here to even walk around the boat hardly.”

Howey was a commercial fisherman for around 20 years. He’d done some carpentry, and a while back decided to build a boat.

There is a tradition of boat building in his family. His dad did it. And he got help from his son who went to the Northwest School of Wooden Boat Building in Port Townsend. But none of them really consider themselves boat builders.

“My dad was a go ahead guy. He built a skiff. So I had that attitude from him: oh, just go ahead and build it!”

According to Howey, before metal boat construction really took off, when there were more people fishing in Sitka, fixing your own wooden boat was just what you did.

In the past, wooden boats were more utilitarian, and whether it was a 50-foot seiner or a ten foot dinghy, they worked just as hard as the metal boats of today. They were working boats, the right tools at the right time.

“I think the history of boat building in Sitka, from what I can see in the troll fleet and other people, is that out of necessity you make your own repairs. It’s sort of out of necessity that I build these boats, because I want a boat to enjoy to use and I’m not going to go out and buy one.”

And in this way, Howey is keeping the tradition alive more than he might know. He jokingly calls himself a wood-butcher and scraps and scarfs together what wood he can find. But he’s also built three boats like this. His dad and his son did too.

“I didn’t use anything particularly special. Time mostly, is what I use up.”