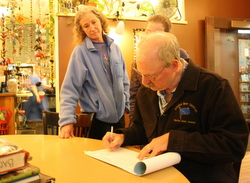 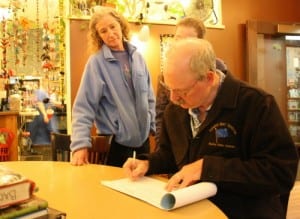 State Sen. Bert Stedman signs his name to a petition to repeal Senate Bill 21, as his wife, Lureen, and daughter Susan look on. If successful, the petition would put the question before voters in August 2014. Organizers must gather more than 30,000 signatures from across the state. (KCAW photo by Ed Ronco)

The Sitka Republican signed a petition on Tuesday against Senate Bill 21. Supporters of the measure, which was signed into law by Gov. Sean Parnell, say it will spur more development in Alaska.

But opponents, like Stedman, call it an oil giveaway.

Like any coffee shop, the Backdoor Cafe is a gathering place where residents talk about current events and local politics over mugs of hot espresso and steamed milk. The walls here are decorated with local art, and also with the campaign swag of local politicians — Democrats, mostly.

So while this place is no stranger to political action, it’s something of a novelty to see a Republican state senator standing at the counter, receiving a petition from cafe owner Bernadette Rasmuson.

She explained how to sign the petition, and then Stedman and his family sat down at a nearby table with the light blue booklet. Stedman signed. So did his wife, Lureen. So did their daughter, Susan.

“That’s her first official act as a registered voter,” he said, as his daughter signed.

Just outside the cafe, Stedman joked that politics are a family affair, and said he wants voters to have a say on the oil tax bill he spent most of the last Legislative session opposing.

“I encourage a full public process,” he said. “Down on the islands in Southeast, we’re certainly not afraid of public process. We have lots of it. I see nothing wrong with having a thorough scrubbing in the media and Alaskans around the state going to the ballot box a year from August and voicing their opinion.”

Changes to Alaska’s oil tax structure in Senate Bill 21 could cost about $6 billion over the next five years. That’s according to a fiscal memo attached to the legislation. And Stedman’s opposition to the bill puts him at odds with many in his party.

He says the majority of Republicans, especially those inside the rail belt between Anchorage and Fairbanks, favor the new tax structure, but that those opinions aren’t as unified in the state’s rural areas.

Stedman himself says he’s not opposed to redoing Alaska’s oil tax structure, which is called Alaska’s Clear and Equitable Share, or ACES, for short. But he says the debate isn’t all or nothing, either.

“The question isn’t ‘Take ACES and be happy, or take Senate Bill 21 and run us off the road,’” Stedman said. “There’s a middle ground in here, where we could modify the tax structure to keep our basin competitive, yet not give away the farm. When somebody stands up and says ‘We have to take 21 and there’s no other alternative,’ I don’t buy it.”

The repeal that Stedman supports, of course, has plenty of opponents. Among them is the Make Alaska Competitive Coalition, in Anchorage. The state Chamber of Commerce, and chambers in Juneau, Fairbanks and Kenai have joined the coalition against the repeal (Sitka’s Chamber of Commerce has not taken a stand on Senate Bill 21, but says it favors tax reform of some kind), along with a host of other statewide organizations, companies and individuals.

One of those organizations is the Alaska Support Industry Alliance. The Anchorage-based trade association represents the companies that support the state’s gas and oil industries. Its members employ about 30,000 people in Alaska.

“We need to increase production,” said Rebecca Logan, general manager of the Alliance. “That’s what SB 21 was designed to do. So that’s one part of the equation.”

The other part of the equation, she said, is to bring sustainability and stability to Alaska’s state budget, which depends on oil revenue.

“The thing we’ve heard repeatedly from everybody in the testimony is that it’s very hard for people to invest billions of dollars here when we’re constantly changing our tax structure,” Logan said. “We change our tax structure again and within four days of that change, we start a referendum to repeal that. In my mind, that’s the very definition of instability, and we are trying to avoid that.”

As for the petition Stedman signed, organizers estimate they have about 28,000 signatures across the entire state in favor of repeal so far. They need 30,169 to put the issue before voters in August 2014.

Stedman says if the petition is successful it will be an uphill battle for those hoping to overturn Senate Bill 21.

“And it’s going to be the David vs. Goliath discussion,” he said. “But when people sit and think about it a minute, they own that oil, and a tax is nothing more than a price to sell it.”

Ray Friedlander is one of the organizers of Sitka’s petition drive. She says they’ve gathered about 800 signatures in the community so far, and estimate they’ll break 1,000 when all is said and done. They’re planning a final push to gather signatures at Sitka’s Fourth of July festivities, before mailing the books to Anchorage on July 5.

The overall deadline for the petitions is July 13.