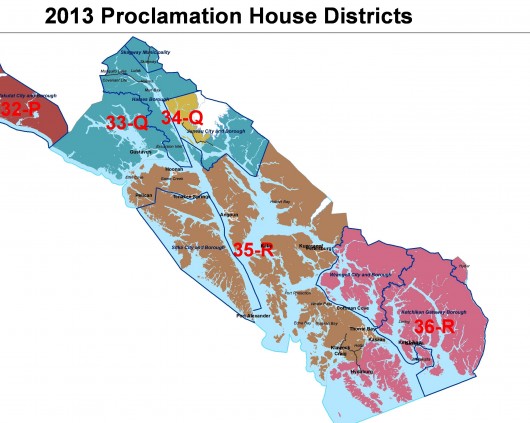 The final redistricting map for Southeast was released July 14th. It shuffles boundaries used in the 2012 election.

Southeast Alaska’s new redistricting boundaries eliminate the possibility of at least one House election rematch. But they could lead to some other challenges.

The House district plan created for last year’s elections put Haines and Sitka together for the first time.

That led to a very close race between incumbent Rep. Bill Thomas, a Haines Republican, and challenger Jonathan Kreiss-Tomkins, a Sitka Democrat.

Kreiss-Tomkins won by 32 votes, less than half a percent. So, many expected Thomas to file for a rematch. 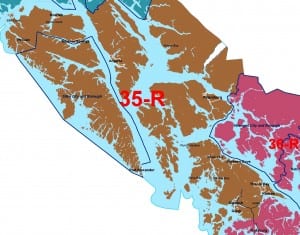 The new House District 35, which includes Sitka, Petersburg, Craig, Angoon, Hoonah, Kake and some other communities.

“I get asked the same question five to 10 times a day: ‘Are you going to run again?’ ” Thomas says.

But that redistricting plan was overturned by the courts. And the new one, for 2014’s election, puts Thomas in the same district as Rep. Beth Kerttula, a Juneau Democrat.

“Being downtown Juneau and coming from Haines, I don’t think I could possibly win in that district. So if I were to run, and the big word is ‘if’ I were to run, I would seriously consider running for the Senate seat. And that’s if Sen. (Dennis) Egan would step down,” he says.

That said, the incumbent in that Senate district, Juneau Democrat Dennis Egan, expects to run next year. 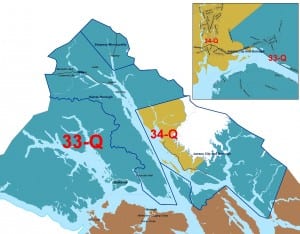 “Yeh, I think so. At least one more term. If I get four more years, it’ll be fine. I’m going to try hard,” Egan says.

But Kerttula, the incumbent in the downtown-Haines-Skagway district, says it’s odd, because it leaves Juneau’s Mendenhall Valley district as an enclave.

“I think that they kind of tortured it a bit to move downtown Juneau and Douglas all the way around the rest of the area. And that looks political to me. But having said that, my focus is just going to be on doing a good job, representing people well and campaigning hard,” Kerttula says.

So she’ll run again next year, with Haines in her district.

Also on the ballot will be Juneau’s Mendenhall Valley representative. Republican Cathy Muñoz is glad her district remains compact, rather than being paired with communities to the north. 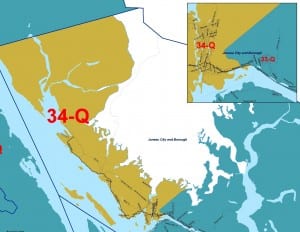 The new House District 34, which includes Juneau’s Mendenhall Valley, Auke Bay and neighborhoods to the north.

“That is one contiguous area that’s represented by a high school and middle school and elementary schools, right in that compact neighborhood area. And so to separate or to carve out a portion of the Mendenhall Valley I think would have been problematic,” Muñoz says.

Further south, Petersburg gets its wish under the new boundaries, separating from the downtown Juneau district and joining Sitka and numerous villages.

Kreiss-Tomkins, the Sitka Democratic representative, says the changes are fine with him and he’ll stand for re-election.

“It’s all Southeast Alaska and as long as it doesn’t include parts of Anchorage or the Mat-Su, I’m pretty happy. I like all of Southeast,” Kreiss-Tomkins says.

Even without Haines’ Thomas in the district, some speculate Kreiss-Tomkins could be vulnerable in the next election. But so far, no one has made a point of announcing plans to run against him. 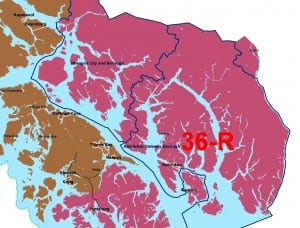 The new House District 36, including Wrangell, Ketchikan, Saxman and Hydaburg.

Others have wondered about Wrangell Republican Rep. Peggy Wilson, who used to also represent Sitka and Petersburg.

The 2012 redistricting effort shifted her into an area dominated by Ketchikan. It’s pretty much the same for 2014. And there’s talk of a serious contender from the larger city.

Wilson couldn’t be reached for immediate comment. But in a June interview, she said she’d run again, whomever she represents.

“You get pulled one way and then you might get pulled another. And I have found out that I can live with whatever they dish out. That’s the way it is, I guess,” she said.

“I think the plan they put forward this time is more reasonable and fair to the public than the previous plan,” says Sitka Republican Sen. Bert Stedman, who represents the same communities as Wilson and Kreiss-Tomkins.

And like them, his district has undergone some changes, such as losing Haines and gaining Petersburg.

He points to Southeast’s loss of two of its eight legislative seats in last and this year’s redistricting changes.

So he’s less worried about exact boundaries and more concerned about the increased legislative dominance of Anchorage and other cities in the Railbelt.

“It doesn’t make a whole lot of difference if you’re in Metlakatla or you’re in Sitka or you’re in Kake or you’re in Petersburg or Wrangell, you’re all in rural Alaska. And we’re all together and we just need to make sure we’re all paddling in the same direction so we don’t get left behind,” Stedman says.

The latest redistricting plan was released July 14th. And, like its predecessor, it could face legal challenges.

If it stands, its boundaries won’t take effect until after the 2014 elections. That means lawmakers will continue serving their current districts through next year’s legislative meetings.