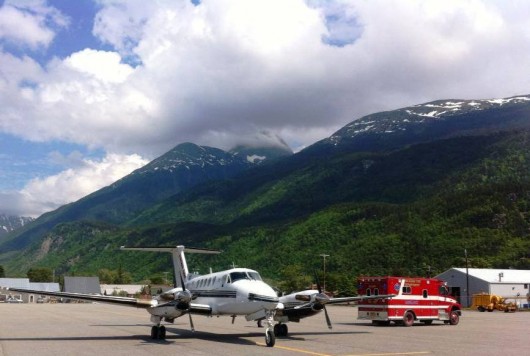 A Guardian Flight turboprop prepares to take off from Skagway’s airport last summer. The company is taking over all medevacs for the SouthEast Alaska Regional Health Consortium. (Image courtesy Guardian Flight on Facebook)

Guardian, based in Utah, already covers night service for the Sitka-based medical provider. SEARHC operated its own medevacs 12 hours a day up until now.

SEARHC laid off the nurses who staffed their own medevacs.

Neumeister says turning all medevacs over to Guardian will be simpler and more efficient.

“We had tried to perform the services ourselves part of each day. And we found that that was not as effective, even though we had very dedicated employees providing the service,” he says.

SEARHC has cut several programs this year to save money.