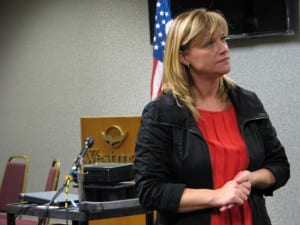 Samson Tug & Barge is gearing up for a major expansion on November 8th. The family-run shipping company is taking over the role of Northland Services in Southeast Alaska.

In recent years, Samson Tug & Barge hasn’t had much of a presence in Southeast. Vice President Cory Baggen says that’s because the company moved operations west after the decline in the Southeast Alaska timber industry.

“But to be real honest, the only time we were truly truly profitable at Samson, I mean where we could honestly say we were completely successful, was when my grandfather was a prohibition agent back in the days of prohibition. I think we did really really well hauling cargo back then. I’ve heard great stories,” says Baggen.

Now, Samson is expanding its operations because Alaska Marine Lines is purchasing Northland Services – AML’s only competitor in the region. The deal, brokered by the Alaska Attorney General’s office, requires that AML assist Samson to ensure competition in Southeast.

“People have asked us where we’re going to be in Southeast Alaska. We essentially are purchasing all of Northland’s assets and taking over all of their facilities in Southeast Alaska. So we will be moving into their two facilities in Juneau. We will have an operation, it might be fairly limited, but we will have an operation in Petersburg,” says Baggen.

The company will also move into facilities in Ketchikan, Craig, Wrangell and Metlakatla. Baggen says that it already purchased thousands of pieces of new equipment as part of the expansion. She stresses that Samson will operate all of its own equipment and is very familiar with handling large volumes of equipment.

Although the Attorney General tasked AML to assist Samson with its expansion, Baggen says her company mainly worked with Northland’s regional managers.

Baggen plans to hire 40 people, maybe more. But, that will depend on the competition with Alaska Marine Lines for cargo.

A Seattle warehouse will open on November first in preparation for the first Southeast sailing on November eighth.

More than anything, Baggen is determined to maintain a presence in Southeast Alaska.

She says, “We’re really excited to dig our heels in and say “no” we’re not moving our finance office to Seattle. We are going to be in Sitka and we’re going to be running this company right here from our home town.”