Ode to a lost newsman 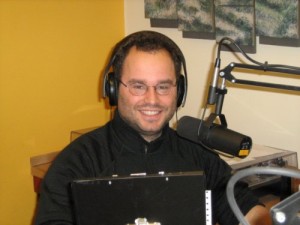 Lichtenstein is the most senior reporter in CoastAlaska, and our regional expert on fisheries. He’s been at KFSK in Petersburg for 18 years, but on Tuesday he hung up his microphone and tape recorder and picked up his Grundens to join the SE commercial fishing fleet full time as a power troller.

Lichtenstein’s been a hand troller for six years. Last summer he bought the Aurora and power troll permit.

KCAW’s Robert Woolsey spoke with Lichtenstein about his change of careers.

Lichtenstein fished the Aurora in Cross Sound last summer, and is thinking about coming down to Sitka this summer. He’s invited Raven News to call him any time to ask how things are going out on the drag. But he says his answer will always be, “No comment”!

Matt Lichtenstein and his colleague in the KFSK newsroom, Joe Viechnicki have written and recorded a song about Lichtenstein’s foray into the world fishing. It’s called “Ode to a Lost Cannonball.”