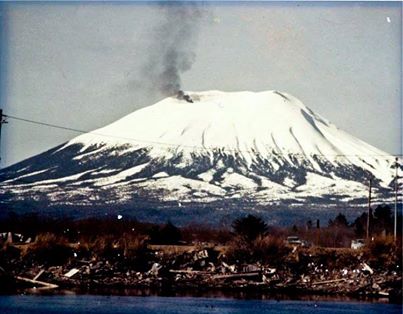 Despite his reputation as a prankster, Porky Bickar was civic-minded. He alerted local authorities to the prank — with the notable exception of the Coast Guard, which sent a plane from Juneau.

The Museum of Hoaxes puts it at number 16 on the list of Top 100 April Fools Hoaxes of All-Time.

The Eruption of the Mt. Edgecumbe Volcano was staged in Sitka 40 years ago today, on April 1, 1974. The prank was orchestrated by Porky Bickar and a group of co-conspirators known as the “Dirty Dozen,” using a helicopter and two sling loads of old tires. KCAW’s Robert Woolsey produced the following piece in 2009, to commemorate the 35th anniversary of the hoax.