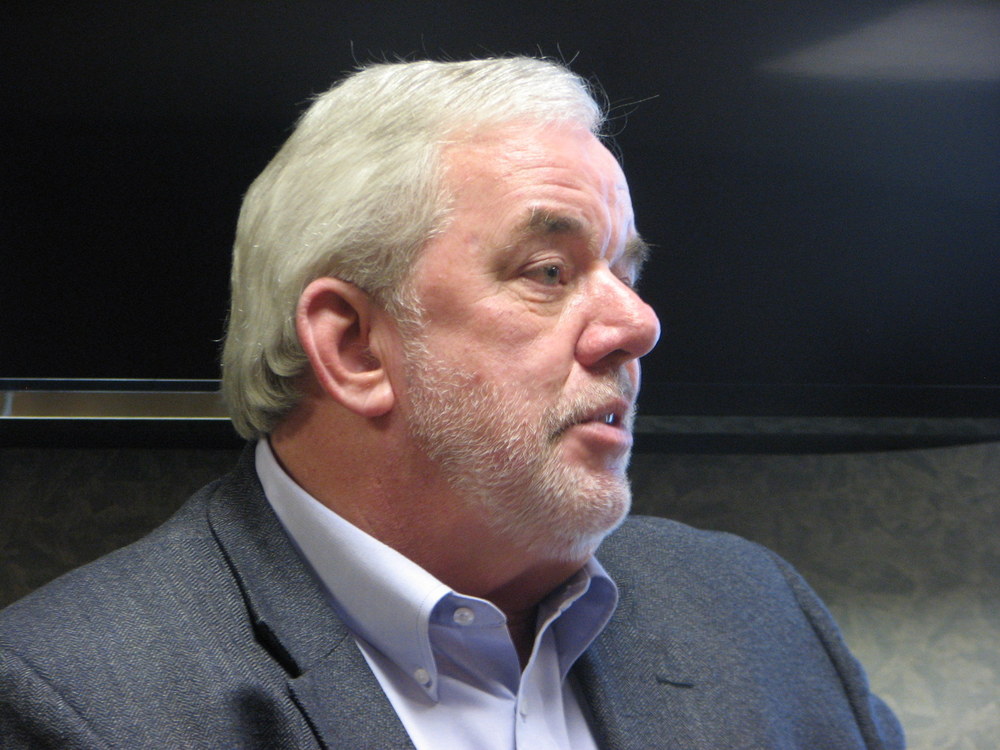 With an oversupply of natural gas in the country, Alaska is exploring the construction of a relatively small, low-pressure gasline within the state’s borders — while still holding out hope for a much larger project should prices improve.

Dan Fauske is the president of the Alaska Gasline Development Corporation — or AGDC. He spoke to Sitka’s Chamber of Commerce on Wednesday about when and where Alaskans may see gas. 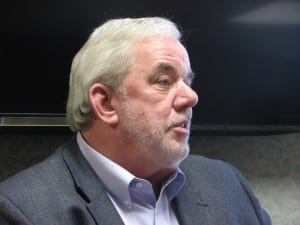 AGDC president Dan Fauske says the construction of a gasline will create 8,000 direct jobs and be “the largest project in the country.” (KCAW photo/Robert Woolsey)

The AGDC is the latest attempt by the state to put something — anything — together to promote the construction of a gasline from the North Slope. The Alaska Gasline Development Corporation was established by the legislature in 2010 to explore in-state options for gas while a more high-profile effort — Gov. Sarah Palin’s Alaska Gasline Inducement Act, or AGIA — was trying to connect North Slope gas to markets in the lower 48 through a gasline in Canada.

Earlier this year, Gov. Parnell announced that the state and TransCanada had called it quits, putting an end to AGIA.

Now, the Alaska Gasline Development Corporation is the only game in town. And Dan Fauske knows this game has been played time and time again.

“We have a plaque in our office. It says, Fairbanks to get Gas. It’s from the 1954 Daily News-Miner. So this debate’s been going on a while.”

The problem is economic. Natural gas is sold in volumes of 1,000 cubic feet at a price — right now — somewhere between $3 and $4. To sell gas, it has to be delivered in pressurized pipelines, or be super-cooled and liquefied.

If you’re close to the gas, it can be a great deal. The city of Anchorage has been served for decades by low-cost gas from oil refineries next door in Cook Inlet.

On the North Slope, where the state has vast reserves of natural gas, Fauske says it’s considered a byproduct.

“For years, the gas a Prudhoe Bay has been reinjected into the ground to force the oil out. The petroleum engineers will tell you that we’ve looked at this gas three and four times. They’ve recycled it.”

The AGDC is exploring a 700-mile gasline from Prudhoe Bay to Nikiski, which would be about one-hundred miles shorter than a gasline to Valdez, where the TransAlaska Oil Pipeline terminates. There are two options on the table. A 36 -inch low-pressure pipeline that would carry so-called “lean gas” — or gas ready for delivery directly to consumers. The other option is a 42-inch pipeline delivering much higher volumes of gas under much higher pressure. The smaller pipeline would cost almost $8-billion and serve primarily Alaskans. The larger pipeline would cost $65-billion, and supply Alaska and the global export market.

The big three oil producers — Exxon Mobil, ConocoPhillips, BP — and even TransCanada would partner with the state in the big pipeline, if it ever pencils out. Fauske says this is a big “if.”

“Oil companies are not charged with taking care of Alaskan citizens. Oil companies do things for their shareholders. I’m not defending them, I’m just saying no one’s going to invest in this kind of project so that 700,000 Alaskans can get a benefit. The reality is: They do things for their shareholders. The irony is that the Alaska Permanent Fund is a huge shareholder of Exxon stock. People say, They should have done this. It’s been looked at thirty times.”

The state invested $355 -million dollars in the Alaska Gasline Development Corporation to perform the preliminary engineering and design for the smaller gasline — called the Alaska Stand Alone Pipeline — which will take about 2 years. Fauske believes that sometime in that window, the two projects will meld and the state will ultimately have a 10-percent stake in a gasline that is operational by 2020.

Fauske spent 18 years as the director of the Alaska Housing Finance Corporation before taking over AGDC. He was on Gov. Palin’s AGIA team, which he says was a good idea, when gas was at $10. His expertise is in finance.

The discovery of shale gas in the northern plains of the US undermined AGIA, but Fauske believes this new gasline strategy, based on revenue bonds, is a workable solution for the state’s energy needs, as well as the largest construction project in the country.

But he says gas is nothing akin to the discovery of oil on the North Slope.

“Oil is king. Gas gives us security. From a revenue standpoint gas will never replace oil.”

Asked by a member of the chamber audience to give odds on which gasline would be built, Fauske pointed to the radio microphone and tv camera and declined. Instead, he quoted a line from the movie 2001: A Space Odyssey, and said, “Something wonderful’s going to happen.”