Mallott: ‘It’s a good time for leadership to change to some degree’ 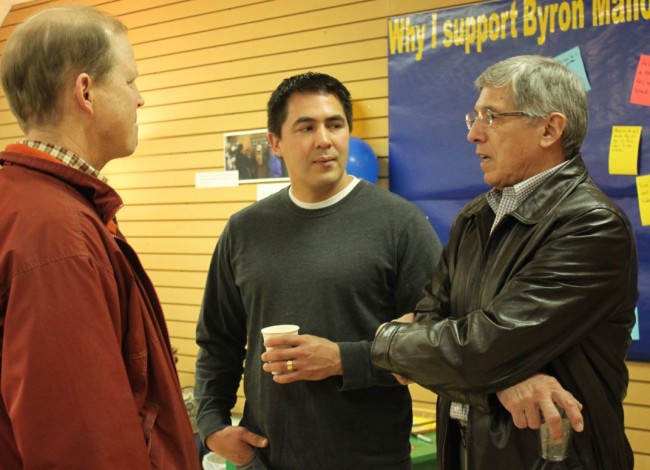 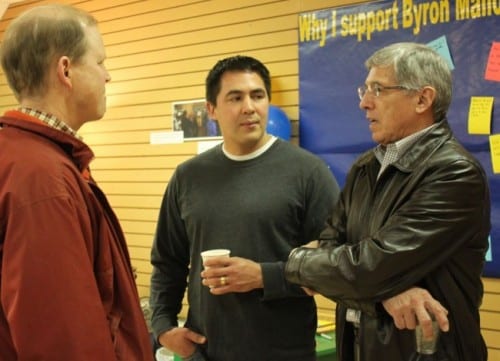 Byron Mallott, right, mingles with visitors at the open house of his campaign headquarters in Juneau. Mallott will leave Sealaska’s board of directors next month to concentrate of his race for governor. (Lisa Phu/KTOO)

Democrat Bryon Mallott will leave Sealaska’s board of directors next month to spend more time campaigning for governor. The move shakes up an already contentious board election.

He chaired Sealaska’s board for about a decade, before becoming its CEO.

He later returned to the board, where he remains. That will end at Sealaska’s June annual meeting, when his term runs out.

Mallott says he’s been thinking about leaving for some time.

“I’m a candidate for governor and my time availability has become an issue to me. So I just decided it’s time,” he says.

Mallott is all but assured to be the Democratic challenger facing Republican Governor Sean Parnell in the November general election.

Sealaska’s long-time CEO, Chris McNeil, is also retiring soon. And former state Sen. Albert Kookesh is leaving the board chairmanship, though not his seat.

Mallott says he’ll complete his commitments to the corporation, then give someone else a turn.

“It’s a good time for leadership to change to some degree. There are many, many highly-qualified shareholders both on the board and amongst our shareholders. And creating that kind of opportunity for them to serve on the board to me is a very good thing,” he says.

The other three incumbents whose terms also run out this year are seeking re-election. They’re Sidney Edenshaw, Ed Thomas and Rosita Worl, who will run together as the management slate.

Four business-oriented shareholders have already announced they’ll run as their own slate.

Spokesman Randy Wanamaker says Mallott’s decision leaves an open seat with no heir-apparent. And that makes the board election more friendly to challengers.

“Every now or then an incumbent leaves for one reason or another,” he says. “And there’s another person who has been groomed or shares the same philosophy as the current Sealaska team steps forward. And they appoint that person in to fill the vacancy or put them on the slate as a new candidate to replace the departing director.”

Slates allow shareholders to vote a single ballot listing a group of candidates. Shareholders can also vote for a mix of members from both slates – or anyone else who runs.

Albert Kookesh, board chairman through the annual meeting, expects a lively race.

Longtime Sealaska critics Mick Beasley and Myrna Gardner are among others running independently.

Sealaska will distribute ballots to its almost 22,000 shareholders on May 15th. They must be cast by June 26th.

Results will be announced at Sealaska’s annual meeting, June 28th in Seattle.