The Dauenhauers teach tour guides how to teach tourists 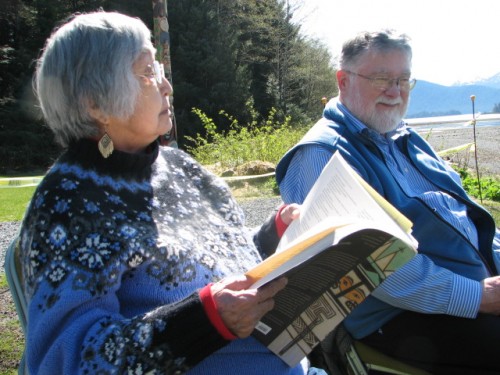 Two of greatest living scholars on Sitka’s Russian and Tlingit past were in town last week to train National Park rangers on the historic battles that took place here. Park rangers give programs, of course, but sometimes they’ll interact with visitors for only a few minutes at a time. So the challenge is: How do you teach visitors about the culture in a way that will have impact – when the most commonly-asked question is “Where’s the bathroom?”

I’m on a bus tour. All the passengers are trained historical interpreters. And the tour guides are the leading scholars on the topic. They literally wrote the book.

Dick: One of the earliest recordings of the history is from Sally Hopkins. And her daughter asked Nora if she would transcribe and translate this…

Nora and Dick Dauenhauer are the author’s of Russians in Tlingit America – the definitive work on the battles of 1802 and 1804.

The bus stops in old Sitka. It’s just a patch of grass near the ferry terminal. But in 1802 it was where Tlingit warriors attacked the Russian fort.

Latanich: This is Dick and Nora is right there in the blue sweater.
Dick: Hello
Park ranger: I like your book!
Dick: Thank you.
Park ranger: I make all of my staff read it.
Dick: It’s a good one I’m glad it’s in there because my memory isn’t what it used to be so at least it’s all in there now.

The Dauenhauers are in town to advise Sitka park rangers how to reinterpret the history for transient cruise ship passengers who know nothing about it.

Nora is Tlingit and a native speaker of the language.

Nora: The way we got into this was I was teaching Tlingit in Juneau high school and I got this letter from a professor.

Dick was the professor, he admired her work. The rest is history.

Dick: We’ve been partners in scholarship for over 40 years and we had our 40th anniversary in November…

Somewhere along the line they got married.

Dick: Still doing business but slower than we used to be.

While their relationship was always solid. The making of Russians in Tlingit American was an on again off again kind of affair.

Dick: The first issue that came up to us in doing this book was who owns history.

Nora was asked to translate Tlingit oral histories recounting the battles. But then Native elders didn’t want to rehash the past, which put the book on hold. When the elders died the new generation wanted to know the history. Then the Soviet Union crumbled – freeing up access to Russian archives. It took decades of cultural and political change before they could complete the book.

Dick: So, these are difficult issues. I think it’s important to kind of be up front that this is living history that this is not just something that happened 200 years ago. People are very aware of that here. 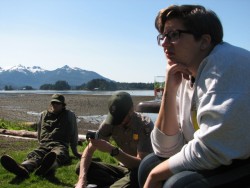 Sitka park rangers take tips from the the Dauenhauers on how to engage tourists. (KCAW photo/by Emily Forman)

Sitkans might be very aware of the history, but tourists from… Idaho? The challenge is getting visitors to care. I asked second season tour guide Janet Drake about her approach.

Forman: So much research, and so many different sources, a combination of written and oral history, and then you have to try and synthesize this for a group of tourists that…
Drake: know nothing about this place and..
Forman: How do you do that?
Drake: I know, that’s the challenge – finding those pieces that hit home for people.
Forman: What’s the most common question you get?
Drake: Where’s the bathroom? Hahaha! Just kidding… But actually that’s kind of serious.

Chief of Interpretation Becky Latanich is always thinking about how to make the history relatable.

Latanich: I think visitors have a hard time relating to this story. They come here and they don’t know anything about it and they think Sitka and they think totem poles. The battle is a little difficult for people because it’s not well know. It’s not Gettysburg. So do you have any suggestions for our staff about what themes you’ve encountered that people might be able to relate to?

Dick: Whoever controlled Sitka controlled the whole Northwest fur trade… If you got a flare for the dramatic you can reinterpret for the tourists… Imagine Katlian coming down, the Russians on the beach, and all of a sudden the Russians are behind them and here’s Katlian with his hammer because it’s easier to bash heads in than it is to pull a dagger out.

While engaging tourists is one thing, retelling the story in a way that’s respectful of the families that have a personal connection to the history is another. Some parts of this history are so sensitive that the Dauenhauers were actually asked to omit some of the detail. And they did because that’s the respectful thing to do.

Dick: And that’s of course the challenge of ethnohistory you are dealing with the families, family memories, and family traditions.

The idea that family history is complicated? Most people, even out of town visitors, can relate to that.