Robidou: Not guilty on all counts 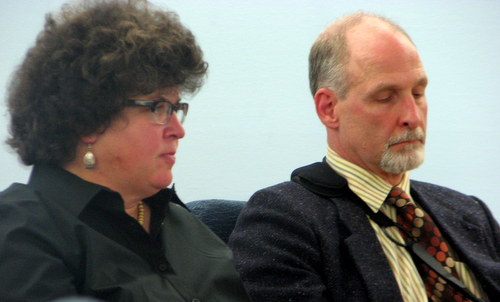 Joe Robidou has been found not guilty on all counts.

A Sitka jury of seven women and five men delivered its verdict in favor of the former school administrator at about 6 PM Monday evening (5-19-14).

“State of Alaska v. Joseph Robidou, verdict form number 1. Count 1, Sexual Assault in the 2nd Degree, K.L. in May 2012, we the jury find find the defendant Joseph Robidou not guilty.”

And so it went for four additional counts of Sexual Assault, three counts of Indecent Exposure, and one count of Assault in the 4th Degree. The state had pressed charges on behalf of three separate witnesses, all current or former teachers at Blatchley Middle School.

Robidou had been facing five-to-ten years prison time, had he been convicted. Magistrate Devaney informed that with the not guilty verdicts, he was free to go.

Both Robidou’s attorney, Julie Willoughby, and assistant district attorney Jean Seaton, who prosecuted the case, declined comment. Several jurors also declined to speak about the case at this time.

After a week-long trial and twelve hours of deliberation over two days, as she put on her raincoat to head out into a rainy Sitka evening, one juror simply looked at reporters and said, “Not today.”