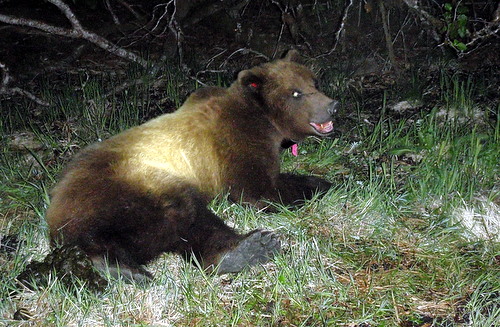 The young male brown bear shot by Wildlife Troopers on June 11, 2014 had been collared just a few weeks earlier. Here it recovers after being tranquilized and collared in Starrigavan Bay. (ADF&G photo/Phil Mooney)

Wildlife troopers shot and killed a bear Tuesday (6-10-14) afternoon, after it tried to reach through a kitchen window.

Sitka police received a call around 2:45 p.m. that a bear was trying to break into a home on the 5300 block of Halibut Point Road.  Alaska Department of Fish & Game biologist Phil Mooney said the bear had managed to reach in through the window screen of a trailer home.

Mooney: This trailer was the end trailer, and at the very end of the trailer was a window that essentially is her kitchen area. And it was reported to me that she was baking a pizza and had pulled it out of the oven, set it on the counter there, and the bear reached up and pulled the corner of the screen up, tore the screen, and then reached through the window … The window, probably the base of it was seven feet off the ground. And the bear, had it been given some time and not had somebody there yelling at it, it may have tried to come through the window. He’s certainly strong enough to do it.

The bear took off, but it was wearing a radio collar, and Mooney and Wildlife Troopers were able to track it. Trooper Tim Hall shot the bear around 4:30 p.m., Mooney said.

The bear was collared just last month, four days after an incident in which a woman found a bear eating her dog in the same neighborhood. Mooney said there’s no way of knowing if it’s the same bear that ate the dog. There have been three bears active in the area recently.

This kind of behavior isn’t typical for Sitka, he said.

Mooney: It is fairly unusual here. We don’t get it in the degree that some other places do. We have had over the years some bears that come up on porches, especially if there’s a dog inside the house. We have had a bear in recent history come up on a porch early in the year when there was a barbecue grill, when they went out and caught an early salmon and grilled it and left the barbecue out, and the bear came around and licked the grill. But typically what we see are mostly bears related to garbage. They knock over a can and grab a bag and run.

Mooney said the bear was a four-year-old male, about 381 pounds. “One of those teenagers,” he said. “That’s probably why he was hanging in the Starrigavan area, because if he moves much out of that area, he’s at risk from other, bigger bears.”

This was the first bear killed by Wildlife Troopers or Fish & Game this year. A Sitka resident shot and killed a bear near Granite Creek road in April. That shooting was ruled a valid defense of life and property.