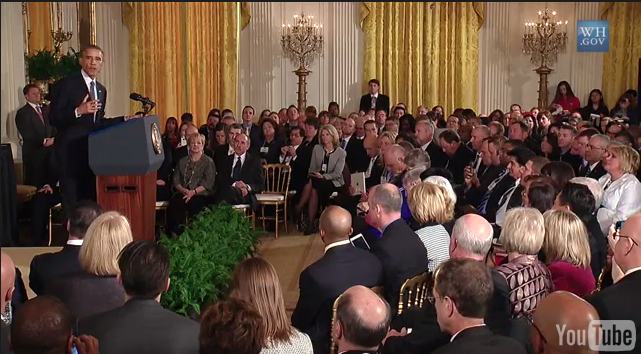 Sitka Schools Superintendent Mary Wegner was in Washington D.C. on Wednesday (11-19-14) for a White House summit on technology and education.

Wegner was one of more than 100 superintendents from across the country — and the only one from Alaska — who were recognized for their efforts to bring their classrooms into the 21st century.

And she got a special shout-out from the president.

Obama: And then you got Mary Wegner, superintendent of the Sitka, Alaska School District. Where’s Mary? She came a long way. There she is. Yeah, give her a hand for coming from Alaska…

The superintendents’ summit is part of the White House’s ConnectED initiative, which aims to bring high-speed internet access to every school in America.

Here’s how the president explained it:

Obama: It’s a five-year plan to close the technology gap in our schools and connect 99% of American students to high-speed internet. And this is why it’s important: right now, fewer than 40% of public schools have high-speed internet in their classrooms – less than half. That’s not good, since we invented the internet.

“Six years ago, the technology in the schools was so outdated that only a few people could even print documents and logging on the internet could take 20 minutes,” he said. “Today, with help of the Recovery Act, the whole district has wifi, the ratio of computers to students is four to one, and falling. Kids are skyping in class with experts from all over the world on a whole range of subjects, and Sitka is now in the top tier of districts in the state.”

“It’s been transformative,” he said.

“Six years ago, the students at Sitka High School came to the school board and said, you’re not preparing us for our future,” she said.

The district received over $1-million in funding under the American Recovery and Reinvestment Act, also known as the stimulus bill, and used it to revamp its technology — everything from switching out dysfunctional email and printing systems to investing in laptops and smart boards for the classroom. The school board now has a goal of equipping every student in the system with a laptop or tablet.

Wegner was the assistant superintendent at the time. She was hired in part to help integrate the new technology into the classroom, and she says the big question for the district has been, “OK, we have the hardwire, but why does this make a difference for learning?”

Chris Bryner has an answer for that. Bryner is a fourth-grade teacher at Keet Gooshi Heen Elementary School in Sitka. When the president mentioned that Sitka students are skyping with experts around the world, he was talking about Bryner’s class.

Bryner assigns “the Big Q,” each year. Students are encouraged to ask any question that they want, and then figure out the answer. Bryner usually tries to connect them with an expert — whether it’s the east coast ice cream entrepreneur who skyped in to talk about how to design ice cream flavors; or Martin Keen, the founder of Keen Footwear, who walked students through how to build a one-legged stool.

“Each time this happens, I think the students get some information they couldn’t get elsewhere,” Bryner said. “But more importantly, I think they really benefit from the fact that these adults are taking them seriously and treating them like colleagues, and it gives them this sense of, you know, if there’s something I want to know, then I have the ability to find out.”

And sometimes, he said, it’s downright magic. Take the student who asked if Bigfoot is real. He got a call back from James Fay, also known as Bobo, from the Animal Planet show Finding Bigfoot.

“And he goes, hey man, you must be the smartest kid in your classroom because only geniuses know that Bigfoot is real,” Bryner said. “And this is this shy kid in my class. And, I wouldn’t say that it’s, like, changed his life or anything, but definitely in that moment, when he hears those words, his whole face just lights up. And to me, it was one of my favorite moments, of just watching that kind of, like, spark happen.”

As for Mary Wegner…

KCAW: How did it feel to have President Obama say, ‘Mary Wegner? Where’s Mary Wegner?’

And, she said, that work will continue.