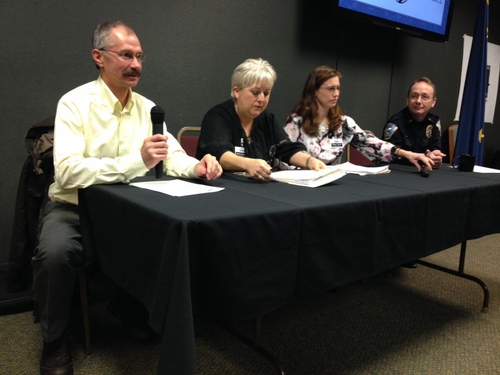 Chamber marijuana panel (l to r) Scott Brylinski, Robin Koutchak, Robyn Taylor, Sheldon Schmitt. Other than practical business matters, the Chamber audience was interested in making sure that legalization did not increase the use of marijuana by kids. (KCAW photo/Robert Woolsey)

Although the personal use of marijuana becomes legal in Alaska later in February, the timeline for the commercialization of pot remains up to the Alaska Legislature. During this week’s Sitka Chamber of Commerce meeting (1-28-15), members listened to, and asked questions of, some of the local officials who are helping to shape the policies that Sitka may adopt as commercial marijuana becomes a reality.

Interim planning director Scott Brylinski recently returned from a conference in Colorado, one of two other states (plus the District of Columbia), where marijuana is now legal.

For a roomful of business people, he went right to the heart of the matter.

“The price of warehouse space in Denver has doubled in the last year. An 800-square-foot grow at current market rates can generate product valued at over $1-million a year at Colorado market prices.”

But Brylinski noted that the gold rush has already tapered. He showed slides of a non-descript warehouse neighborhood in Denver, with cars and delivery trucks parked around — like thousands of other similar places in the country.

“There’s a commercial grow inside this building. He’s got about 10,000 square feet. He spent about $600,000 to get the building set up for his operation. He has an $8,000 a month electric bill. It takes a pretty substantial investment and business savvy to make these businesses work. That was pointed out at the conference: Initially there were a bunch of businesses that started and didn’t really last. It was the people who had business sense, capital, and business skills that made successful businesses. Not the work-out-of-the-back-of-your-pickup truck kind of businesses.” 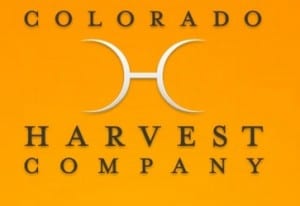 “There wasn’t neighborhood blight. No stoned people sitting around outside. No broken windows. No deterioration in the neighborhood.”

But there has been proliferation. The commercial licensing of marijuana for both production and retail distribution became legal in Colorado on January 1, 2014. Like Alaska, Colorado’s law has an opt-out option for communities which don’t want commercial operations, and 210 of Colorado’s 390 communities have chosen to prohibit commerce in marijuana. In those communities that allow it, however, business is booming.

“In the year that marijuana’s been legalized, the number of retail establishments exceed the number of Starbucks in Denver. More than McDonald’s, more than Starbucks.”

When marijuana becomes legal in Alaska, grow operations and stores won’t be outnumbering coffee shops. Legalization, for the time being, only covers personal growing and consumption — things that exist illegally now.

Everything else is up in the air — which could be a good thing. Municipal attorney Robin Koutchak believes it’s important for Sitkans to not be shy about facing some of these future questions.

“It’s kind of hard to wrap your head around it at first, you know. You’re whispering. You’re saying, Gee that might be a good idea, and you’re looking around to see who’s listening. And then it hits you again. It’s legal. It’s gonna be legal, so why are we whispering?”

Both Colorado and Washington state have taken slightly different approaches to commercial licensing. Koutchak told the chamber that said there were lessons that Sitka could follow, or not.

“This is just kind of a new world for us. Uncharted territory. There’s a couple of states ahead of us. But we want to do things better.”

The extent of the unknowns surrounding commercialization became evident as the chamber audience focused on practicalities. For instance, could growers or retailers do business at federally-chartered banks while marijuana remains illegal on the national level? What about shipping product or supplies across international borders to reach Alaska, or shipping across federal waters between in-state ports on one of the ferries?Would the Coast Guard enforce federal drug interdiction laws on vessels in state waters? And did the marijuana trade invigorate communities economically.

The panel, comprised of Brylinski, Koutchak, assistant school superintendent Robyn Taylor, and police chief Sheldon Schmitt, did not really have answers. That prompted another question, from Nancy Yaw Davis.

“What’s the rush? I just sense that there’s such urgency to make these decisions. And most of us are ignorant of the drug or of its consequences, or whether we have to do it in Sitka. Can we be different, or do we have to be right up front — as you suggest — and handle it up front? Or can we say, Hey let’s hold up, learn what we can, and then have another vote? And vote community by community, rather than assume that we have to have it.”

No one ruled out this approach, either. But regardless of how much or how little time Sitka takes to consider the commercial licensing of marijuana, personal use is here beginning February 24.