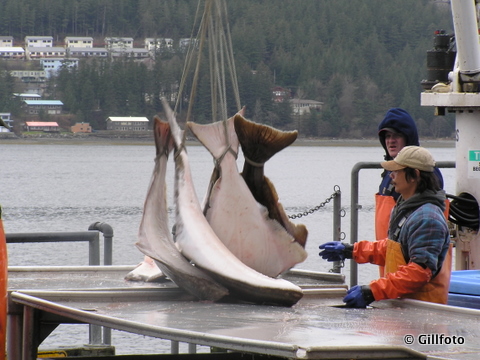 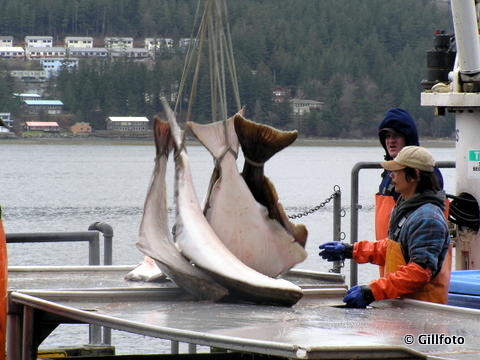 Of the thirty million pounds of halibut caught last year in commercial fisheries statewide, nearly a third was thrown back into the ocean, dead.  It was netted accidentally by boats targeting other fish.

Now, that may change. The North Pacific Fishery Management Council, which oversees the federal waters off Alaska, is considering major new limits on wasted halibut — or bycatch — at its meeting in Sitka this week (week of 6-1-15).

The decision will have impacts from Southeast to the Bering Sea.

The North Pacific Fishery Management Council is meeting in Sitka’s Harrigan Centennial Hall through next Tuesday (6-9-15). There are opportunities for public comment throughout the week. You can find the council’s full agenda and schedule here, the  livestream here, and instructions for those who wish to comment here.

Critics argue that too many fish are dying in the nets of big Bering Sea trawlers — and that means less halibut for everyone else.

“Halibut’s one of the two most important species, along with salmon, to the coastal communities of Alaska,” she said. “The bycatch threatens all of that.”

Behnken calls the Bering Sea Alaska’s halibut “nursery ground.” Studies have found that young fish migrate from there into the Gulf of Alaska and Southeast.

When trawlers target flatfish like yellowfin sole, they drag their nets through the same deepwater habitat where halibut live — and invariably catch some. The law requires trawlers to discard that halibut, but most fish don’t make it back into the water alive. Last year alone, trawlers scooped up — and discarded — about five million pounds of halibut in the Bering Sea.

This has been the case as long as there’s been trawling. But the issue has become more urgent in recent years, as halibut abundance has dropped.

In the last ten years, the exploitable biomass – that is, the population of fish big enough to catch – has declined by half. And halibut fishermen have seen their catch limits drop with it. But the caps on bycatch have remained essentially the same.

In the Central Bering Sea, halibut fishermen initially faced a 60-percent cut in 2015. That cut was avoided, but only on the condition that bycatch in the region declines this year. The impacts would be huge, Behnken says.

“The Bering Sea communities, especially communities like St. Paul in the Pribilof Islands, they don’t have salmon,” she said. “They don’t have musk ox. They don’t have caribou. They don’t have moose. Halibut is the most important species for them for subsistence and for their commercial fisheries… They’re looking at something that, I think, threatens cultural extinction if they lose the halibut stock.”

ALFA has asked the Council to reduce the trawl bycatch cap by 50-percent.

Chris Woodley is head of the Groundfish Forum, which represents most of what’s called the “Amendment 80” fleet. That fleet is made up of six companies, most based in Seattle, with about 18 catcher-processors targeting flatfish in the Bering Sea.

“A 50-percent bycatch reduction would be absolutely devastating to the Amendment 80 sector,” he said. “Essentially our boats would be tying up five to six months early. And it would also have significant downstream impacts to the maritime economies of remote communities in Alaska, primarily Unalaska, Adak, Kodiak and Sand Point.”

Woodley said the fleet has already made voluntary efforts to reduce bycatch. And they’re asking the Council to let them adopt other measures, like deck sorting, which would allow them to return more halibut to the water alive.

“There may be some more things that we can do. But all of that comes at a cost,” he said. “And we’re concerned that people don’t appreciate that we’ve already made significant improvements, and it’s not so simple as just flipping a switch and everything gets better. Any additional improvements are going to have potentially huge costs to our fleet.”

For Behnken, the big issue is what kind of fisheries Alaska wants. The state’s commercial halibut fleet is made up of about a thousand small boats, most of them family-owned, in communities up and down the coast.

“I would say the way fisheries are changing, it’s the way our country’s changing. It’s what small farmers have faced. It’s the industrialization of the food system,” she said. “To me, this decision the council is facing, it’s really a landmark decision. They are deciding between a fishery that has a hundred-year tradition of being commercially exploited by small boats — community based, this is a really important fishery to Alaska — and this fish being taken as bycatch, wasted in the industrial, Seattle-based fleet.”

But whether the Council sees it that way is up in the air. The Council is expected to vote on bycatch caps this weekend.