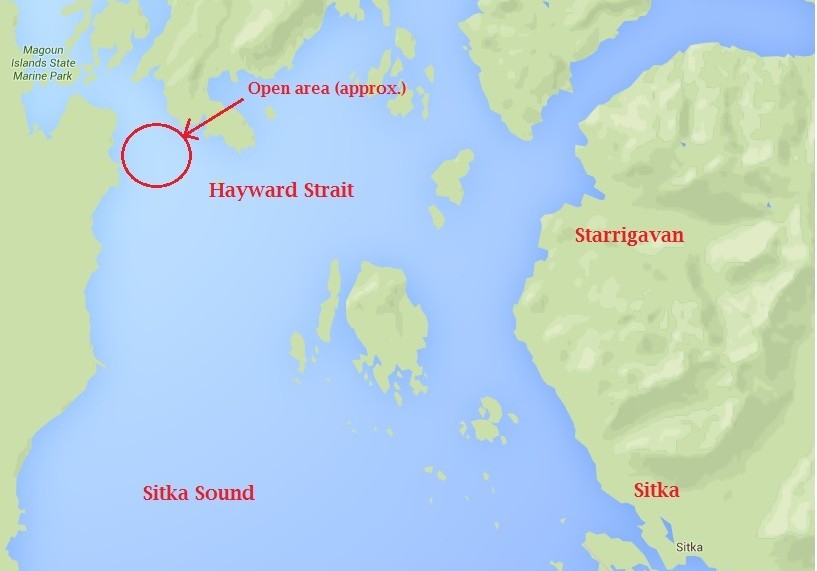 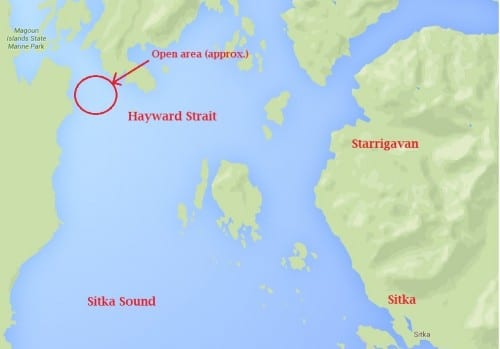 Herring fishing opened about 10 miles NW of Sitka. Early test fishing wasn’t very productive, leaving many to believe that fishing wouldn’t happen today (Thu 3-17-16). But then a large school was found near Kruzof, and seiners opened their season. (KCAW graphic)

The commercial herring season opened today (Thu 3-17-16), more abruptly than in past years. Herring seiners had about 2-days’ notice to get to Sitka. And then about another 4 hours’ notice to prep their gear.

Although winter salmon trolling wrapped up only 10 days ago, this always feels like the opening bell of the commercial fishing season in Alaska.

Five…four…three…two…one…open! The Sitka Sound Sac Roe Herring Fishery is now open. This is the Alaska Department of Fish & Game standing by on channel 10.

That’s state biologist Dave Gordon, who manages the commercial herring fishery, and who — over the years — has also become its voice.

Gordon opened fishing at 2:45 Thursday afternoon along the shoreline of Kruzof Island, about 10 miles northwest of Sitka.

Fishing closed at 5:05 PM. The openers are typically 2-3 hours, as seiners home in on schools of large fish with adequate proportions of females. The value in this fishery comes from the egg sacs inside the females, which are stripped, salted, and sold overseas in Asia.

There are 48 active permit holders in the 2016 fishery. That’s not a lot compared to other fisheries, but owning a herring permit is a little like owning a silver mine: according to the Commercial Fisheries Entry Commission, purse seine permits for Southeast Alaska are now worth $227,500 — a staggering figure that’s actually DOWN from the all-time high permit price of $540,000 in 2011.

This year seiners are targeting 14,741 tons of herring. Processing capacity limits fishermen to no more than 4,500 tons per day. A big harvest day usually means fishermen will take a day off to let processors catch up.

The commercial fishery is over when the guideline harvest level is met, or the herring start to spawn — whichever comes first.

The beginning of spawning is also the beginning of the subsistence harvest of roe-on-hemlock. Subsistence fishermen cut hemlock branches from the forest and sink them in quiet coves around the inner islands of Sitka Sound. Successful fishermen return to find their branches covered in a thick layer herring eggs, which they can eat on the spot, cook or freeze at home, or deliver to family and friends around the state.