Bear attack survivor: ‘Grace was extended to me’ 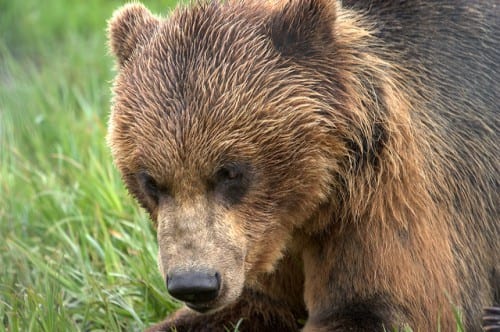 Survivor Ken Steck says he “did not anticipate a bear threat” in his party’s camping area in Disenchantment Bay. “I could have done more to warn this bear,” he says. (Flickr photo/sach1tb)

The survivor of a brown bear mauling near Yakutat 10 days ago (5-13-16) says the animal was startled, and attacked instinctively.

Ken Steck is recovering from his wounds with family in Anchorage. He spoke recently with KCAW’s Robert Woolsey about his experience.

Some of the early official reports of Kenny Steck’s encounter with a brown bear in Disenchantment Bay on May 13 indicated that he had a gun when the bear charged, but did not have time to use it.

That’s not quite right.

“For a lot of reasons — and I’m not exactly sure why — I really didn’t even think twice about bringing a weapon or bringing the bear mace.”

Steck had camped overnight on a gravel bar with seven other people. Given the noise and disturbance that a party of this size makes, he didn’t think it necessary to bring one of the two hunting rifles on his 200-yard walk to fetch water.

But a gun may not have made any difference. The bear stood up in the brush around 30 yards away, and went on the move.

“When I heard the bear I turned around and it was already running at me three-quarters, if not full-, speed. I keep replaying the scenario in my head. Even if I had a rifle slung around my back I don’t know if I would have had enough time to get it off my back, put a round in the chamber, and place a well-aimed shot.”

In some ways, Steck says it was a by-the-book brown bear attack. At least it seems that way in hindsight.

“I feel like the bear saw me as a threat and it took me down. And once it realized that I wasn’t as tough as it thought I was, it took off and didn’t want anything to do with me.”

Steck estimates that the bear was on him for about 20 seconds, though he has no way of knowing for sure.

Steck is a military veteran. He spent four years in active duty in the Marine Corps as a firefighter and EMT. After leaving the Marines he served in the same capacity as a civilian in Iraq, for fourteen months in Kirkuk, about 100 miles north of Baghdad. He says he was scared sometimes doing that work, but nothing comes close to his experience with the bear.

Steck says that during the encounter itself, his fear was almost irrational.

“I do remember that when the bear had my head in his mouth my brain was in shock — my body, obviously, was in shock. And I just remember thinking, This bear is going to swallow me whole. He’s going to eat me and walk away and no one’s ever going to find me. I was kind of thinking crazy thoughts. Obviously the bear wouldn’t be able to do that. But I did — I thought the bear was going to take me and no one would ever find me, and I was going to die within the next few seconds.”

Steck says the bear left on its own. The other members of his party heard him shouting at the animal but arrived too late. Four of them were nurses: Steck’s wife Hannah, with eight years’ experience in emergency rooms and intensive care units, and his brother-in-law Isaiah Carlson and his wife, Heidi, who’ve worked for the last three years at the Alaska Native Medical Center in Anchorage; and Ellen Ivers, who just graduated from nursing school.

Steck jokes that he “married into a good family.” They provided first aid and transported him the quarter-mile along the gravel bar to their boat, and then on the 90-minute return to Yakutat.
He’s serious though, that he harbors no ill-will toward this bear.

“I understand that the bear was just reacting. I don’t have any intentions of going to hunt that bear, and wanting to kill the bear.”

Steck admits that he might have been a little too complacent going to fetch water that day, and that this encounter will affect the way he hunts and camps and enjoys the outdoors in the future.

He’s feeling grateful to be alive, and a little humbled.

“Grace was totally extended to me, and I did nothing to deserve it.”

Steck was in transition between jobs in Juneau and Glenallen when the attack occurred. He says his new employers at the Bureau of Land Management are willing to give him time to heal. Steck expects a full recovery in four to six months.