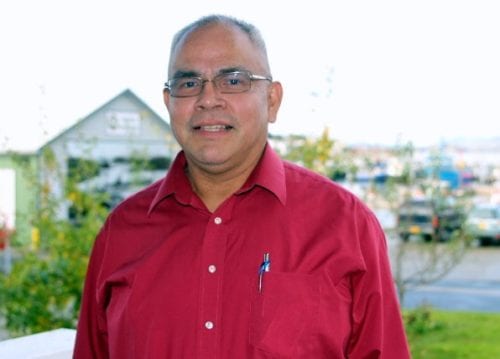 Michael Baines is one of three candidates running for Tribal Council Chairman. Baines was first elected to tribal council in 2004 and has been serving as chairman since 2012. (Robert Woolsey/KCAW photo)

Michael Baines is one of three candidates running for Tribal Council Chairman, along with KathyHope Erickson and Lawrence “Woody” Widmark. Baines was first elected to tribal council in 2004 and has been serving as chairman since 2012. He will be listed on the ballot as Michael Baines. All Tribal Council Candidates have been offered this opportunity to prepare a statement.

First a little about me. I was born and raised in Sitka. My parents were Conrad Baines, Sr., who was a US Army WWII Veteran, and Velma Baines.

After I graduated from Sitka High, I went on to UCLA and received a Bachelor’s degree in math and physics, and later worked in education and counseling for over 15 years in Sitka including at Raven’s Way, Sitka High School, Mt. Edgecumbe High School, Pacific High School and Sheldon Jackson College.

I served on the Sitka Tribal Council for about 12 years, including four years as the Vice Chairman and four years as the Chairman. I served on the Herring Committee, Education Committee, Legislative Affairs, and other committees. I also participated in the Fish and Game Advisory Committee for three years. I was an ANB Camp 1 Officer and a Tlingit and Haida Delegate. I was recently a delegate to the ANB Grand Camp Convention in Juneau.

Before I became Chair, the tribe was too willing to accept the status quo. For instance, we didn’t push for an 160 acre land allotment that we should be getting through a probate court in January. Now all the departments at the tribe are improved. While Chairman, I advocated for improved services to tribal citizens and I also pushed for a safe work environment for STA staff.

But there is much work to be done still. We need to do a Tribal Needs Assessment, that’s currently under way. And we need to get a good solid strategic plan based on the needs assessment.

We’ll soon have a 3 million settlement in the bank and we’ll soon receive an 160 acre allotment through the probate court. This will put us in an ideal position to do these things.

With your help, I’ll push for improvements to increase services to tribal citizens. Please vote for me – Michael Baines – for Tribal Chair for Sitka Tribe of Alaska on November 8th at Sheet’ka Kwáan Naa Kahídi Community House. Thank you.

Election Day is Tuesday, November 8th. Polls will be open for tribal citizens between 8 a.m. and 8 p.m. at Sheet’ka Kwáan Naa Kahídi Community House. Voters must bring their state or tribal ID card.  Absentee ballots are available at the STA Offices (456 Katlian Street) between 4:30 and 6:30 p.m. through Monday, November 7th. For more information, contact STA’s Elections Supervisor Rose Demmert at 738-5450.