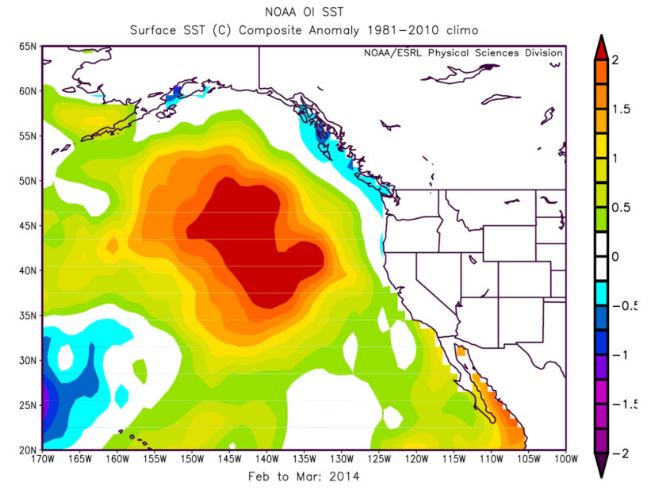 This image from the NOAA ESRL/Physical Sciences Division dramatically illustrates a sea surface temperature anomaly (SST) nicknamed “The Blob” in 2014. While this SST has not persisted, there has been a temperature change sufficient to affect the food supply of chinook smolt, according to ADF&G’s Ed Jones.

While the recent Chinook Symposium in Sitka (5-21-18) was noteworthy for heat surrounding the renegotiation of the North Pacific Salmon Treaty, it also was a platform for the most current science about the decline in king salmon.

Ed Jones is the chinook salmon research coordinator for the department. He painted a fairly bleak picture of salmon survival — from the very first moment that 2-year old king smolt enter saltwater.

“That is by far the biggest driver in this period of poor production,” he said. “They’re dying at sea. All the information suggests that these fish are dying in their first couple of months at sea. It’s anecdotal in some cases, and in other cases you combine some of the work that’s done on the Yukon with what we’re doing, and it’s basically pinned it down to their first three months at sea that we’re losing 99-percent of our smolt to marine mortality. So yes, fisheries, seals, killer whales are all added factors, but the biggest driver is Mother Nature right now.”

Less than one-percent of salmon smolt from some Alaska rivers are surviving to adulthood.

Jones discussed another phenomenon associated with the down cycle in king salmon: The fish are getting smaller. It turns out that’s not really true — kings can spawn as five-year olds, after living in the ocean for three years. The biggest fish are six-year olds — known as four-ocean fish. Every age class is the same size it’s always been; it’s just that very few kings are making it to six.

“That is by far the biggest driver in this period of poor production,” he said. “They’re dying at sea… It’s anecdotal in some cases, and in other cases you combine some of the work that’s done on the Yukon with what we’re doing, and it’s basically pinned it down to their first three months at sea that we’re losing 99-percent of our smolt to marine mortality. So yes, fisheries, seals, killer whales are all added factors, but the biggest driver is Mother Nature right now.”

“Essentially all the females are in the 5-year old component or larger. The three-ocean or larger fish. Now that we’re losing our older age females they’re now shoved into one age class — in this case in Alaska the five-year olds, or three-ocean fish. So that’s a recipe for disaster really because if you have a bad brood year come through — poor production off of a single brood year — you’ll essentially have no females coming back. So that’s an alarm bell to me, and that’s the situation we’re facing this year. We have a poor 5-year old component coming back to Southeast this year;  there’s going to be very few females on the spawning grounds as a result,” he said.

But by far the most disturbing information from ADF&G’s chinook research was the likelihood that most of the variables contributing to the decline in king salmon are beyond our immediate control. Given the wide distribution of chinook along the Pacific Coast, and the extent of the problem, scientists are beginning to consider the impact of climate change on the ocean environment.

“So we don’t know what’s causing it,” he said, “But at a Board of Fish meeting six years ago board member (Orville) Huntington said, ‘Well, if you know the water’s too warm what are you going to do, cool it?’ And it made sense: We don’t have any control over what’s driving this, but more than likely it’s a water temperature issue that’s affecting food, that’s affecting these fish. We’re really good figuring out how many fish leave the system and how many come back, but we don’t know the in-between. And if we did know the in-between, we probably wouldn’t be able to do anything about it.”

Jones said that the department was looking at the survival rates of hatchery kings around the region, for possible clues to improving the success of wild stocks. He said, “There are some areas like Anita Bay that have taken a dip, but weathered the storm better than other areas.”

Note: This story was amended on 6-1-18 to fully transcribe the quotes from ADF&G chinook salmon research coordinator Ed Jones.