Both sides testify on subsistence controversy 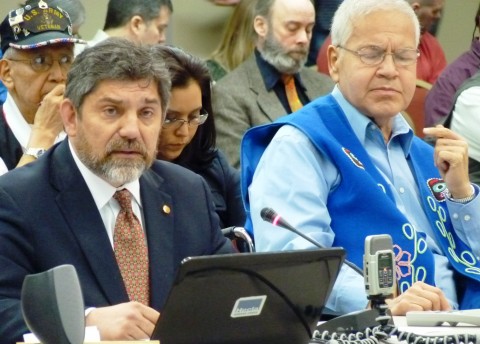 Different sides of the Angoon sockeye controversy made their case before the Federal Subsistence Board on Thursday.

Kootznoowoo General Manager Peter Naoroz said purse seiners are taking too many sockeye salmon that should go to the community.

He said in some years, enough for fish return for both groups. But in others, the harvest is unbalanced.

“The question is: ‘Who takes the risk for a bad year?’ Is it the fishermen who have these mighty boats who can move to another location where the fish are? Or should it be the community of Angoon? It can’t pick up and move. Those fish are coming home,” he said.

Commercial fishing groups disagreed. They said subsistence sockeye numbers could increase if a key spawning route is improved – by blasting a waterfall or building a fish ladder.

“This is a specious and confrontational petition without merit. Until the Board of Fisheries decisions are shown to interfere with federal subsistence priorities, there’s simply no legal basis for bypassing state management in Alaska’s salmon fisheries,” he said.

The Southeast Alaska Seiners Association and the Petersburg Vessel Owners Association were among those also opposing the jurisdiction petition. They suggested alternative methods of improving the subsistence catch.

The subsistence board will continue its deliberations Friday, though its recommendation to federal officials will not be made public.