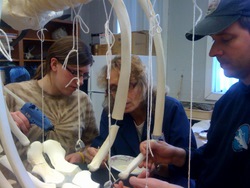 The bones of a killer whale recovered from Kruzof Island last year will soon be on display at the Sitka Sound Science Center. Volunteers and scientists spent this week rearticulating the orca skeleton.

SLIDESHOW: The whale’s journey, starting on the beach a year ago, and ending in the lab this week.

One year ago, Shannon Atkinson was standing on a Kruzof Island beach some 10 miles west of Sitka. She and a team of volunteers worked furiously against a rising tide, stripping the meat off the bones of a young killer whale in order to transport the skeleton back to Sitka.

“At which point we’ll freeze it, and then we’ll take the rest of the meat off,” she said in 2011. “But the more we can get off now, the less we have to carry, so it’s actually out of convenience that we’re doing this.”

Atkinson is a professor in the School of Fisheries and Ocean Science for the University of Alaska and she’s still standing near the bones.

But a year later, the smell of rotting whale meat has been replaced by the smell of glue. The dirty, wet bones are now pristine and dry. And instead of lying in the rapidly flooding intertidal zone of Kruzof Island, the skeleton’s components are lined up on tables inside the Sitka Sound Science Center.

“This is the first rib bone, which is also his clavicle,” Atkinson said. “If you look, there is a bony growth coming out here. This had to have happened in-utero. This is not the result of a broken bone.”

As the team has worked with the bones over the last year, they’ve noticed irregularities just like that. Those help tell the whale’s story. One of the biggest surprises was the sternum, which has made it difficult to put the rib cage back together.

“So part of our challenge is to try and keep it lined up knowing that this whale was very asymmetrical in his sternum,” Atkinson said. “Part of the challenge is because he has a broken sternum just on his one side here.”

Keeping the whale bones lined up is partly the duty of Alaina Avery, an AmeriCorps volunteer who’s been working with the bones for months. Avery has a biology background, but today, her work entails physics. She’s standing underneath the partially assembled skeleton. One of her eyes is closed, and she’s staring at two pieces of weighted twine that are hanging off the backbone.

“So I am looking down those two plumb lines making sure I only see one so I know they’re in line, and that the sternum is in line with those two strings,” Avery said. “I’m not in pain. Though I might (be) after standing here for however long it takes.”

The work has moved quickly. Three days into the work, the backbone and several of the ribs were already reassembled. Just one week ago, all the bones were being photographed and scanned for inclusion in a digital library.

Robert Schlader is holding one of the whale’s caudal vertebrae – that’s one of the bones that makes up the tail. He gives it a quick once-over with a toothbrush and positions it on a piece of foam, in front of a rectangular scanner that’s slightly larger than a computer tower.

Schlader says the data gathered here – through these three-dimensional scans and through standard photography, will become part of a project called VZAP. That stands for the Virtual Zooarchaeolgy of the Arctic Project.

“(It’s) an online, 3D and 2D osteological comparative collection for fish birds and mammals for the northern latitudes,” Schlader explains — basically, a visual database of bones from animals across the entire Arctic.

“We’ve got things ranging from sea mammals all the way to fish with birds thrown in,” he said. “And you can actually look at different types of animals. You can look at the difference between a shrew femur and a fox femur and a squirrel femur because they’re all there.”

That’s really handy for scientists in the field who need to figure out what they’re looking at.

“And what we found out was that there are a lot of people who are interested in looking at bones. Not just archaeologists,” he said. “Not just faunal analysts. You’ve got kids up in little tiny villages up in northern Alaska, in this case specifically, Barrow, who are using our online comparative collection every day, every week.”

When this whale finally appears in the collection, it will be from the combination of millions of pieces of data. Photographs of each bone will be combined with tiny little points detected by the laser scanner.

It will take a few weeks to get it all together, but when it’s done, the whale now called “Kruzof” will be one more resource for scientists, students and, well, you.