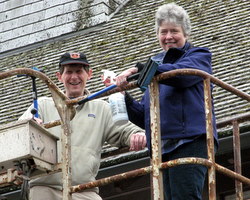 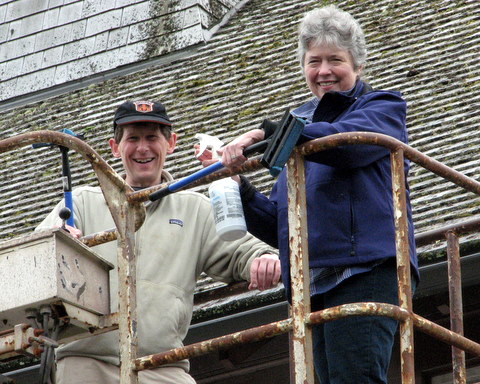 Around one-hundred Sitkans turned out Saturday (5-5-12) to scrub, scrape, haul, and hammer at the second annual volunteer day on the campus of Sheldon Jackson.

But there was at least one non-Sitkan in the crowd: Representative Sharon Cissna, an Anchorage Democrat, who was testing the waters for a run for congress this summer.
Click here for iFriendly audio.

Cissna and her husband, Sid Atwood, were on a Snorkel Lift with Alaska Arts Southeast director Roger Schmidt when I caught up with them.

This was no brain trust or secret policy meeting. The three were washing the windows of Allen Auditorium, the centerpiece of the Sheldon Jackson National Historic Landmark.

Cissna represents House District 22, the university and medical area of Anchorage. She says more people come into her district to work than reside there.

Something about washing windows on the oldest campus in Alaska put her in an upbeat – if metaphorical – mood about education.

“It is a boom. But it’s part of a boom that no one’s really paying attention to in a real serious way on the state side, and the federal side, mind you. We’re not really looking at it with really good vision, with the lights really bright enough. So that we’re able to see and hear the people who are experiencing it.”

Cissna rose briefly to national prominence last year for her open defiance of the Transportation Security Administration’s new rules regarding full-body scans. The sixty-nine year old has undergone a mastectomy. When a body-scan at the Seattle airport last February detected evidence of the surgery, she was directed by the TSA to a pat-down, which she refused. She told reporters that a prior physical hand search left her feeling “violated.” She eventually returned to Alaska by car and ferry.

The incident has since influenced her legislative agenda. It also touched a nerve with the public.

“I’ve thought about it a huge amount, and I’ve talk with – gotten letters from more than 2,000 people wanting to talk about that very subject. Most of them haven’t wanted it to be a big public thing, because it hits people really close.”

Cissna agrees that the TSA incident is symptomatic of a larger disconnect between the federal government and Alaskans. It’s a view she shares, in some respects, with the state’s sitting congressman, Don Young. One distinction she draws, however, might be that she feels better equipped than the incumbent to restore the conversation between Alaskans, their congressional delegation, and Washington DC.

“It’s been a kind of evolutionary thing for me. Because I’ve been active in the state now since the late 1960s, and have known Don Young and had different conversations with him. He and I do have very similar feelings about the TSA situation, and his background of having gotten them the original funding, and early part in that, and now he’s terribly disappointed in what they’ve done. But I think one of the things that’s different between he and I is that I’m one of these people who wants to jump into the middle. And get at it, to make things work, get the job done. And he’s a person who has been in that job for a long time, and it hasn’t been done. We haven’t gotten the part that is essential: Alaska to be considered.”

Cissna has served 14 years in the state legislature. Two other comparatively unknown Democrats also have filed for the primary election, which will occur near the end of August. Cissna says she considers no one – not even Don Young – to be an opponent. She wants the campaign to be about ideas.

During her twenty-four hour visit to Sitka, Cissna planned to meet at a local café to discuss the TSA.

Then, it was back to Juneau – by ferry.