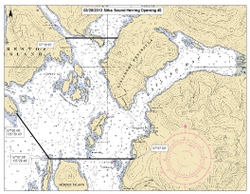 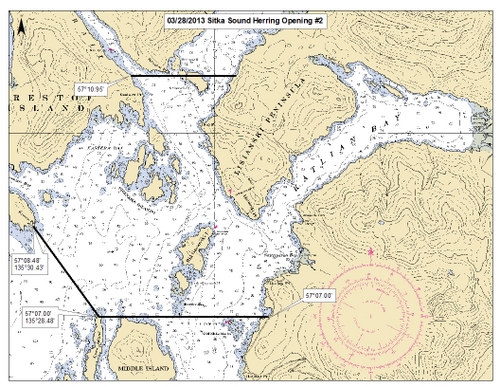 These are the boundaries of today’s opening in the Sitka Sound sac roe herring fishery. (Image from ADF&G)

The Alaska Department of Fish & Game has scheduled the second Sitka Sound Sac Roe herring opening of the season this afternoon (Thu 3-28-13) at 2 PM. The fishery will take place in the waters north of Crow and Middle Islands. Seiners on Wednesday landed around 21-hundred tons in the season’s first opening.

Department biologist Dave Gordon, who oversees the fishery, reported several samples from the morning’s test fishing — all with mature roe content at 12-percent or more. 10-percent mature roe is the threshold for a fishery.

In sac roe fisheries, herring are caught just prior to spawning. The roe sacs in the females are considered a delicacy in Asian markets.

Around fifty permit holders are competing for a share of this year’s harvest in Sitka, which should top out at just over 11,500 tons. Last year’s catch was worth roughly $8.5 million at the dock.