Library technology worth hooting about 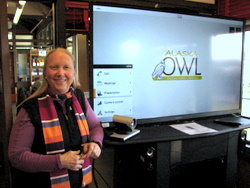 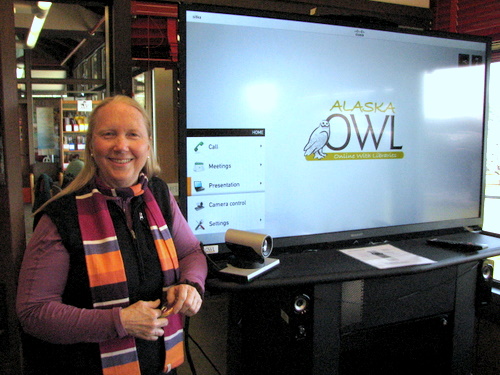 Kettleson Memorial Library has installed some technology worth hooting about.

OWL, or “Online With Libraries,” is a broadband internet initiative for public libraries — funded by the federal government, the Gates Foundation, and other granting agencies.

The most visible change at Kettleson will be eleven new high-speed internet workstations, and three laptops.

“Because there are so many challenges in Alaska. You know, it’s not so tough in Sitka, but lots of villages had no service whatsoever. So it wasn’t a cookie-cutter program either. They had to go in and customize depending on the needs of each locality.”

The major component of Sitka’s grant, however, is back in Bell’s office. It’s a large flat-screen monitor, as wide as a desk. It’s a video-conferencing system with a direct link to a hub at the University of Alaska in Fairbanks. From there, the system can connect to anyplace in the world that has comparable broadband service.

Bell says videoconferencing — even at this scale — is becoming the norm.

“I feel as though it’s pretty basic technology. Because if you think of how many people… this is kind of like enhanced FaceTime, or Skype, or I do a lot over my Gmail account, so it’s not all that foreign to me, and it’s highly useful.”

Since the Online With Libraries system was installed, members of Sitka’s municipal government have videoconferenced with the governor, and some food service workers have taken an eight-hour hygiene class. Bell says the public is welcome to reserve time to use the system, but they might have some competition — from her.

Bell frequently schedules public programs at the library — authors, spelling bees, poetry events, and travel presentations. The OWL network has opened the world outside of Sitka to her. For example, she was interested in videoconferencing with actual owls — the birds — for this Saturday’s launch party at Kettleson. She didn’t have to go far.

“I was looking up owls. There were about six or seven different museums or raptor centers who have programming that we can make use of. And right now this grant is covering the costs of those programs, which ranges from $50-125 per session. But you get a live, interactive conversation, demonstration, or presentation from many different parts of the country.”

In the end, Bell decided to bring in a real owl for the party, Tootsie, from the Alaska Raptor Rehabilitation Center, and to videoconference with a legislator, Jonathan Kreiss-Tomkins, and noted anthropologists Nora and Richard Dauenhauer.

The Online With Libraries launch party begins at 10 AM this Saturday, April 6, at Kettleson, and is scheduled to last an hour.