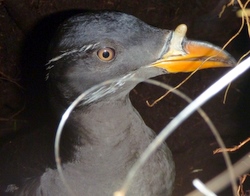 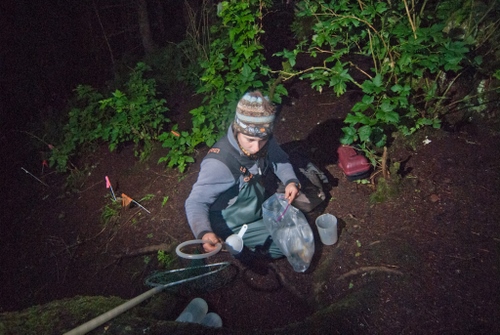 Alexis Will, a graduate student at the University of Alaska Fairbanks, calls herself a “Ninja of the Night,” but it has nothing to do with martial arts.

Will is a biologist who studies the foraging behavior of the Rhinoceros Auklet, a sea bird which returns to land only once every twenty-four hours, during Alaska’s short summer nights. 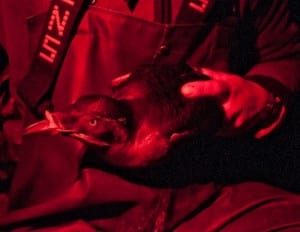 Despite climate change, receding ice pack, ocean acidification, and other environmental pressures on Arctic species, the Rhinoceros Auklet – or “rhino” for short – is thriving, and Will is determined to discover why. She spent two months last summer on a storm-battered mound of volcanic rock ten miles out in Sitka Sound called St. Lazaria Island. Will captured and tagged rhinos to gather data on their movements at sea, and collected feathers to analyze their physiology.

Although it was not a part of her research, Will also captured sounds as thousands of nesting pairs of rhinos, murres, storm petrels, and other birds descended on St. Lazaria every evening. She sent this audio postcard. 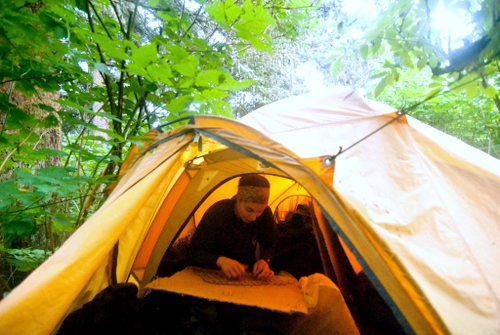 By day, Will returns to camp to record data. The number crunching happens at UAF in the fall. (SCS photo/Matt Dolkas.)

Alexis Will’s research on St. Lazaria Island near Sitka is funded by the North Pacific Research Board and the Institute of Arctic Biology. Will plans to spend another summer on St. Lazaria this year.