Smokey makes it to Sitka 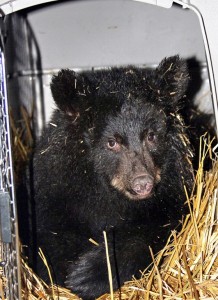 A young black bear cub orphaned near Seward is seen here after arrival Friday at its new home in Sitka at Fortress of the Bear. Photo courtesy Phil Mooney, ADF&G.

The young black bear cub called Little Smokey is the newest resident of Sitka’s Fortress of the Bear.

The non-profit educational center has featured only brown bears, but to give Smokey some company, the Fortress has agreed to adopt a second orphaned black bear to be donated by the Alaska Department of Fish and Game.

The cub has become a social media sensation as people around the world monitored the animal’s capture.

His predicament started on Oct. 12 when law enforcement responded to reports of an adult black bear breaking into a vehicle outside Spring Creek Correctional Facility near Seward. The bear was wounded by police and disappeared into the forest.

Then authorities started receiving reports of two to three unaccompanied young black bear cubs in the Spring Creek area. A lone cub also was reported and captured by Alaska State Troopers, who asked Seward Animal Control to hold the cub until a home could be found.

Fortress of the Bear volunteered.

When Little Smokey arrived at the Fortress, Mooney said he was coaxed out of the shipping kennel with an apple slice. He ate several slices, drank some water and curled up on a mound of straw, Mooney said.

“It certainly appears to me that the cub has good care in Seward, given its disposition and condition, so kudos to the facility there,” he said.

Fish and Game estimates more than 100,000 black bears live in Alaska, with many more found in Canada. Black bears also live in about 45 of the Lower 48 states. Black bears have life spans of 15 to 20 years.