Sawmill Creek Road project: A blast from the past 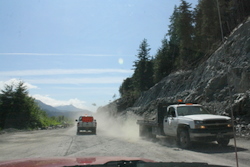 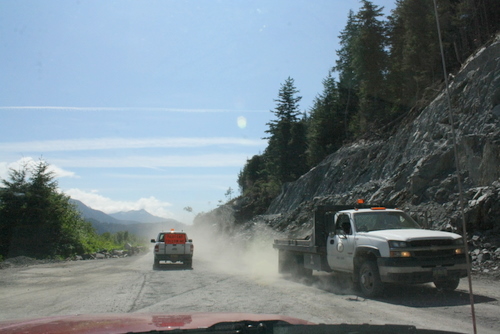 A truck from contractor QAP (Quality Asphalt Paving) leads motorists through a work zone along Sawmill Creek Road earlier this summer. Blasting is over for the season on the project. (KCAW photo by Ed Ronco)

The blasting along Sawmill Creek Road this fall has been blamed for a series of water main ruptures in Sitka — along with many smaller inconveniences to motorists, tourists, hikers, and bikers headed out to the fare end of the community’s road system.

The state-funded project has been five years in the making, and many Sitkans — at least in one coffee shop patronized by KCAW’s Rich McClear — have forgotten how it came to be such an earth-shaking effort.

Many coffee drinkers where I sip are former pulp mill workers. They drove that road to work for years and the road seemed okay. Bonnie Richards worked at the mill for more than two decades and she asked, “So why are they widening the road so much right now, now that there’s not much industry out that way?”

I went to city hall where the engineering department referred me to the State Department of Transportation. I called Al Clough, Southeast Regional Director for the Alaska DOT.

“We, being the department of transportation are building the project that the City and Borough of Sitka requested us to build.”

In fact this project was on the city’s legislative wish list.

“They wanted a reconstructed highway with widened shoulders and separated pedestrian access. You probably remember that the old road basically had no shoulders on it. The new section has two 11 foot driving lanes, a 4 foot paved shoulder on either side of that and then on the water side it has an 8 foot sidewalk. If you look at the topography along there, of course, it’s quite steep in most places. And if you’re going in there and going to be widening out the roadway to allow for better pedestrian, bicycle access and such you really only have two choices either you put fill in the inlet there in Silver Bay or else you make a cut into the hillside.”

And, according to Clough, putting fill into Silver Bay would have required a complicated permitting process. So they chose to blast into the mountains. Some of the money for the project came from federal appropriations. State Senator Bert Stedman got the rest of it in 2008 by rolling it into a General Obligation Bond proposal that the public voted on. Sitka got 10.8 million dollars from that bond issue. About two and a half million of that was for the sidewalk and bike path.

Aside from a wider road, shoulders and a bike/pedestrian path Clough says there will be another plus for motorists.

“Those new rock cuts, which I’m sure you’ve seen, have been laid back quite nicely and dealt with some of the unstable areas right out there by the mill site where that one rock slide has comes down, which has been mitigated somewhat.”

And this, Clough says, will be a big benefit as the Sawmill Creek Industrial Park draws more businesses and employees. Even some of my fellow coffee drinkers remember the time a rock slide closed the road, just after a shift change at the mill. It cut the mill off from Sitka for the better part of the day. Clough thanked Sitkans for their patience and said.

“It’s gonna be a heck of a nice improvement that will be there for generations to come.”

Blasting on the road is now finished and construction will pause for the winter on November 15, according to Clough. The whole project should be complete by July 15, 2014.