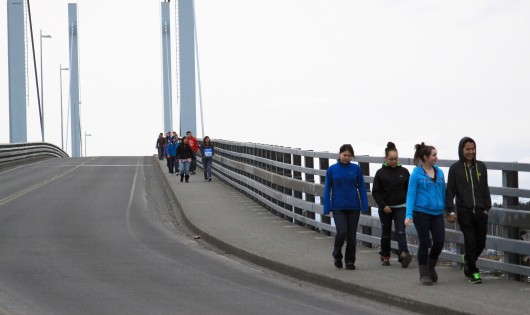 Sitka has been named one of the most pedestrian-friendly cities in America.

The city gets about 86 inches of rain each year and nearly half of the city’s incorporated area sits under water – a pair of statistics that, to an outsider, might not suggest a community built for travel by foot. But this year, Sitka became the first city in Alaska to be named a “walk friendly” community.

The designation comes from the University of North Carolina’s Pedestrian and Bicycle Information Center, which created the “walk friendly” award in 2010, to highlight communities that are making walking a lifestyle.

Participants in Sitka’s 2012 health summit decided to apply for the “walk friendly” designation, to assess the city’s strengths and weaknesses from a pedestrian’s point of view.

“You have a lot of physical health benefits – fresh air, exercise, heart healthy, that kind of stuff,” says Charles Bingham, who heads up the local group Walk Sitka, which applied on behalf of the city.  “[But] there’s also economic health. People seem to want to be in an area that’s more walkable.”

The city received a “walk friendly” report card, which praised in particular the high percentage of Sitkans who walk to work – more than 11%, according to the census bureau. The report also cited Sitka’s extensive trail system, slow speed limits downtown, and low number of pedestrians involved in traffic accidents.

Forty-four cities across the U.S. have been declared “walk friendly.”  Sitka received a bronze-level designation. Seattle is the only city to win a platinum designation. Juneau is listed as an honorable mention.

There are some challenges when trying to compare Sitka with other communities. For instance, though most residents live on just 35 miles of paved road, the city’s formal boundaries encompass a much larger, and wilder area.

“Most communities, you’re talking a 30 or 40 square mile area,” Bingham says. “With us, we had to call in and say the city and borough of Sitka is 4o00 square miles!”

That led to some unusual entries in Sitka’s application. In a section designed to assess the percentage of city land devoted to open space, the form asks, area of municipality? Answer: 4,811 square miles.

But good luck walking most of it.