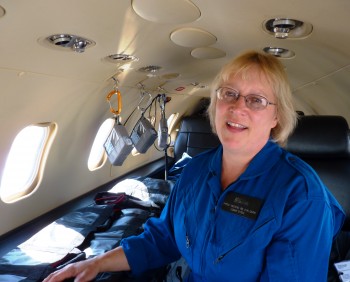 Airlift Northwest’s Shelly Deering explains the medical equipment in a medevac Learjet. She urged lawmakers this week to pass a bill allowing the service’s membership program to keep operating in Alaska. (Ed Schoenfeld/CoastAlaska)

A bill aimed at restoring a popular medevac insurance program is getting some attention in the House.

Senate Bill 159 would change state rules to allow Seattle-based Airlift Northwest to resume its AirCare membership program. It pays the gap between the total air-ambulance bill and what insurance covers.

State regulators last year ordered an end to the program, because it no longer followed their rules.

“Your constituents require air medical transportation when a hospital or first responder has determined they are critically ill or injured. This is a time that is filled with urgency, stress and anxiety. Not having to worry about the cost of the transport is one less stress for the family,” Deering said.

Airlift Northwest is part of the University of Washington medical system. Its AirCare program costs $99 a year for a household. About 3,200 Alaskans are enrolled. (Learn more about medevacs in Alaska.)

While the focus is on AirCare, the bill also covers other air-ambulance membership programs.

Karla Hart is an AirCare member who’s urged others to join.

“Fortunately, none of us have needed to use it. But we all know people who have been medevaced and we know people who were medevaced before they had this program and some of them are still paying for that a decade later,” Hart said.

The bill was held so the committee could consider a technical amendment. The panel plans another hearing soon. If the bill passes out, its next stop could be the House floor.

Juneau Representative Cathy Muñoz, who authored the measure’s House version, is one of 10 co-sponsors.