Sitka herring fishery could open as soon as Thursday 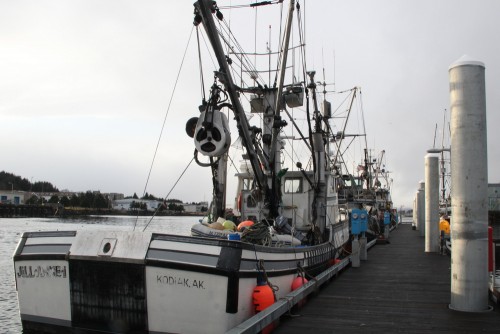 The multi-million dollar Sitka Sound sac roe herring fishery could open as early as the end of this week. The Alaska Department of Fish & Game announced Monday evening (3-17-14) that as of 8 a.m. Thursday (3-20-14), the fishery will be placed on two-hour notice. That means seiners could have their nets in the water as soon as Thursday morning, if the department’s test samples find a high enough percentage of mature roe, or eggs, in the fish by then.

The Sitka herring fishery packs a major economic punch in a short time span. The roe is sold to markets in Asia, and the fishery, which only lasts about a week, is worth an average of nearly $6 million to fishermen at the docks.

Seiners will target over 16-thousand tons of herring in Sitka Sound this year. That’s considerably more than last year’s limit — but it’s a target, not a guarantee. For the last two years, the herring spawn has happened so fast that the fleet wasn’t able to catch the full limit.

To harvest the roe, the herring must be caught before they spawn, in the window of time between when the female fish develop mature eggs and when they actually move to shore to lay those eggs. Determining that window is the difficult job of Fish and Game biologist Dave Gordon.  He said the Department decided to put the fishery on notice this week so that they’ll be ready in case things start to move fast.

“We have very large fish,” Gordon said. “The sample we saw yesterday was really as big as they get in Sitka Sound, 200-gram-plus fish. And from what we’ve seen from those larger fish, when they get ready to spawn, they go. And they do it in a hurry, so we want to be prepared for that.”

Once it opens, the fishery will progress in stages. There’s only enough processing capacity in Sitka to handle about four- to five-thousand tons of herring at once. With 48 seiners participating in the fishery, that typically means the opening only lasts a few hours, Gordon said.

“You’re really putting them on the fish,” he said. “The fish are there, and you’ve got 48 boats that have fairly huge capacity to get fish, and it doesn’t take long to get the kind of tonnage that we’d be looking for. Four- or five-thousand tons can be caught in 15 minutes depending on the situation.”

After an opening, the fishery must close for about two days to allow the processors to work through the catch. With a harvest level of about 16-thousand tons, Gordon said, he’s anticipating about four separate openings.

The department’s research vessel, the Kestrel, will be in Sitka starting Wednesday (3-19-14). Fish & Game will also be conducting daily aerial surveys.

The department will hold an organizational meeting for fishermen and processors at 1 p.m. Wednesday, March 19, at the Westmark Hotel in downtown Sitka.