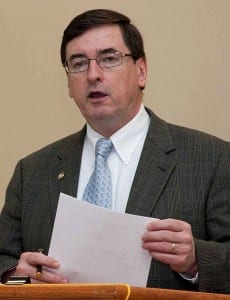 Anchorage Mayor Dan Sullivan is running for Lieutenant Governor. He came through Sitka last week (Tue 5-13-14) — and he’d like to get one thing straight, right off the bat.

“Of course, I am the original Dan Sullivan,” he says.

That’s right: there will be two Dan Sullivans on the ballot this August, both Republicans, both running for statewide office. The other Dan Sullivan, former attorney general Dan Sullivan, is hoping to win the Republican nomination to challenge Senator Mark Begich.

This Dan Sullivan – Anchorage Mayor Dan Sullivan – is facing off against State Senator Lesil McGuire for the Republican nomination for Lieutenant Governor.

Sullivan was elected mayor of Anchorage in 2009, and again in 2012. He is term-limited, so he’s turned his attention to statewide office. While the primary responsibility of Alaska’s lieutenant governor is overseeing elections, Sullivan says he hopes to have “a place at the table” making statewide policy. One area he’s especially focused on is education. He wants to revamp the way the state handles teacher training.

“We all know that the way to get student performance up is to get great teachers in every classroom,” he says. “It all happens between those walls.“

Sullivan is proposing a “Great Teacher Fund,” modeled after the system used in Finland. The state would fund top students’ graduate education, if they come back to teach in Alaska. Students would have to be in the top five percent of their class to qualify. And to become a high school teacher, they would be required to earn a master’s degree in a subject, plus a teaching degree.

“So you’re attracting the top students to go into it, you’re putting them through a very rigorous curriculum, and you’re getting the commitment from them to teach in Alaska,” Sullivan says.

Sullivan recently made headlines after he compared the required payment of union dues to slavery. He told KCAW that was hyperbole. But as mayor, he championed an ordinance to set some limits on collective bargaining for the city’s public employee unions, and he continues to believe that law is good policy, he says.

“My challenge with public employee unions is, for example in Anchorage, they’re a pretty strong economic force, which means they can literally elect the people who vote on their contracts,” Sullivan says. “That’s a conflict of interest. When you can put incredible resources into electing a member of an assembly who has the ultimate say on approving your contract, that’s a very very powerful and conflicting place to be.”

The primary will take place on August 19. The general election will be held on November 4.