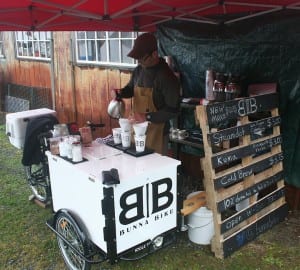 Chris Bryner was just trying to keep warm. It was his third day out selling coffee from his new venture, Bunna Bike Coffee, and a chilly wet breeze was coming in off Crescent Bay. His outdoor stand alongside the Sitka Sound Science Center’s old mill building makes for a picturesque but nippy workplace.

We asked him why he picked that particular location.

“(Laughs) Yea, that’s a good question. I wanted to be here because the chowder cart is here, the Ludvig’s chowder cart. It’s my goal to convince people that coffee is culinary. Just like people think of Ludvig’s as culinary, they respect Ludvig’s for the quality of their food. And I want to elevate coffee to that same thing. When you do that it benefits farmers,” said Bryner.

Using the website Indiegogo, Bryner raised 115 percent of his startup funding, enabling him to invest in a couple of serious coffee grinders and a mobile, pedal-powered coffee cart made by Icicle Tricycles. His goal is to generate revenues for humanitarian causes half a world away. What started four years ago as project for his fourth grade class at Keet Gooshi Heen Elementary School has turned into a summer enterprise for Bryner.

“We brewed coffee each week, sold it to teachers and staff and donated the money to Coffee Kids, which is a charity that works with coffee-farming families in Latin America,” said Bryner. “We’ve done that every year for four years. Back in October my wife and I adopted our daughter from Ethiopia and we wanted to figure out a way to give back to Ethiopia also.”

Through the coffee project, Bryner’s students learn subjects like economics and trade, math and geography. Bryner is committed to buying direct trade coffee beans and donates ten percent of his sales to two charities doing good work in Africa. He gets his beans from an Anchorage roaster named Steam Dot.

“Direct trade, where these roasters are really going down and working directly with farmers, it just improves the quality too. For example, they will show the farmers how to improve their practices to increase the quality and then they are willing to pay a premium if they do that. And it’s exponentially more money than fair-trade was able to get so its a really good deal,” said Bryner.

On Wednesday, Bryner brewed a pour-over cup of Steam Dot’s La Virgen, the result of a trip to the mountains of Colombia made by Steam Dot’s owner.

“They bought the whole lot, so this is the only place where these beans exist in the U.S., they work directly with the farmer.”

Bryner said with a wide grin that two customers from Portland had just told him his coffee was as good as the famous Stumptown beans, an honor for him. But why Bunna?

You can learn more about Bunna Bike and Chris Bryner here and by liking his Facebook page, Bunna Bike: Brew Coffee Build Community.