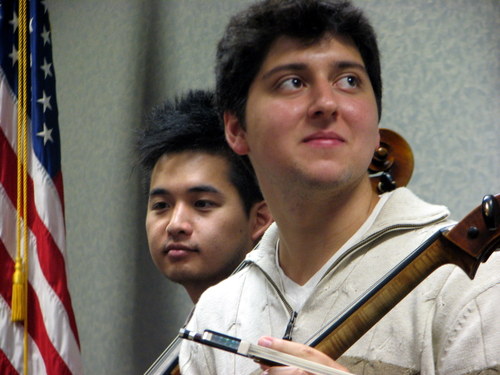 Sitka is packed with students in the summertime, but these students have the largest luggage.

The Sitka Cello Seminar is at its halfway point. Ten students from around the country are in town, living in Stevenson Hall on the Sitka Fine Arts Campus, and taking daily master classes with a pair of renown faculty.

The seminar performed for the Sitka Chamber of Commerce this week (7-9-14).

The first Sitka Cello Seminar will conclude with a public performance — a Cellobration — this Saturday, 7:30 PM at Harrigan Centennial Hall.

These are only 4 of the ten students in the first-ever Sitka Cello Seminar, but the cello is a big instrument — human-sized really — so it feels like there are more like 8 performers in the Westmark banquet room.

Alexander Cox, Robert Lee, Wesley Skinner, and Hannah Hoffman are all advanced cello students, in upper-level undergraduate or masters programs. They’ve been playing together for a week under the tutelage of Dr. Melissa Kraut, of the Cleveland Institute of Music, and Zuill Bailey, the artistic director of the Sitka Summer Music Festival.

Bailey told the chamber that most festival master classes breed competition. The Sitka program had another objective.

“This seminar isn’t just about the lessons, but about representing yourself where you feel comfortable with yourself. What does that mean? It means becoming comfortable and finding yourself, through music, being able to communicate in public both verbally and through your instrument — which is kind of the same. And how does one take music to the people? By taking music to the people! So they’ve been playing in the cafes — Westmark, Ludvig’s Wine Bar — and we’ve been playing in the hospitals and having open rehearsals in the community. The young artists we have are also teaching Fine Arts kids, to learn to teach. And we as faculty are giving presentations for the whole school. So as you can see it’s kind of perfect storm. An incredible time.”

The Sitka Summer Music Festival’s purchase of Stevenson Hall, on the former Sheldon Jackson College, made the seminar possible. The building has housing and rehearsal space for ten musicians plus faculty. Next summer, the seminar will expand to include talented amateurs. Ultimately, Bailey said there was no need to limit programs to summer at all.

“That building, Stevenson Hall, will be used every week of the year for something, and it will become kind of a lightning rod for the arts, and also for business and tourism. It will start here and resonate throughout the state. Because — they (the students) don’t even know this yet — with these residencies we’re going to create artists who are comfortable taking music to the people, and then in exchange for that time that they’re here, we’re going to send them throughout the state on tours, and perform for everyone in Alaska. So we’re creating our own future. And we’re creating a template that has never been seen before.”

Bailey did not appear overconfident discussing future plans: He reminded the audience that the Sitka Summer Music Festival was established in 1972 as the world’s first chamber music festival.