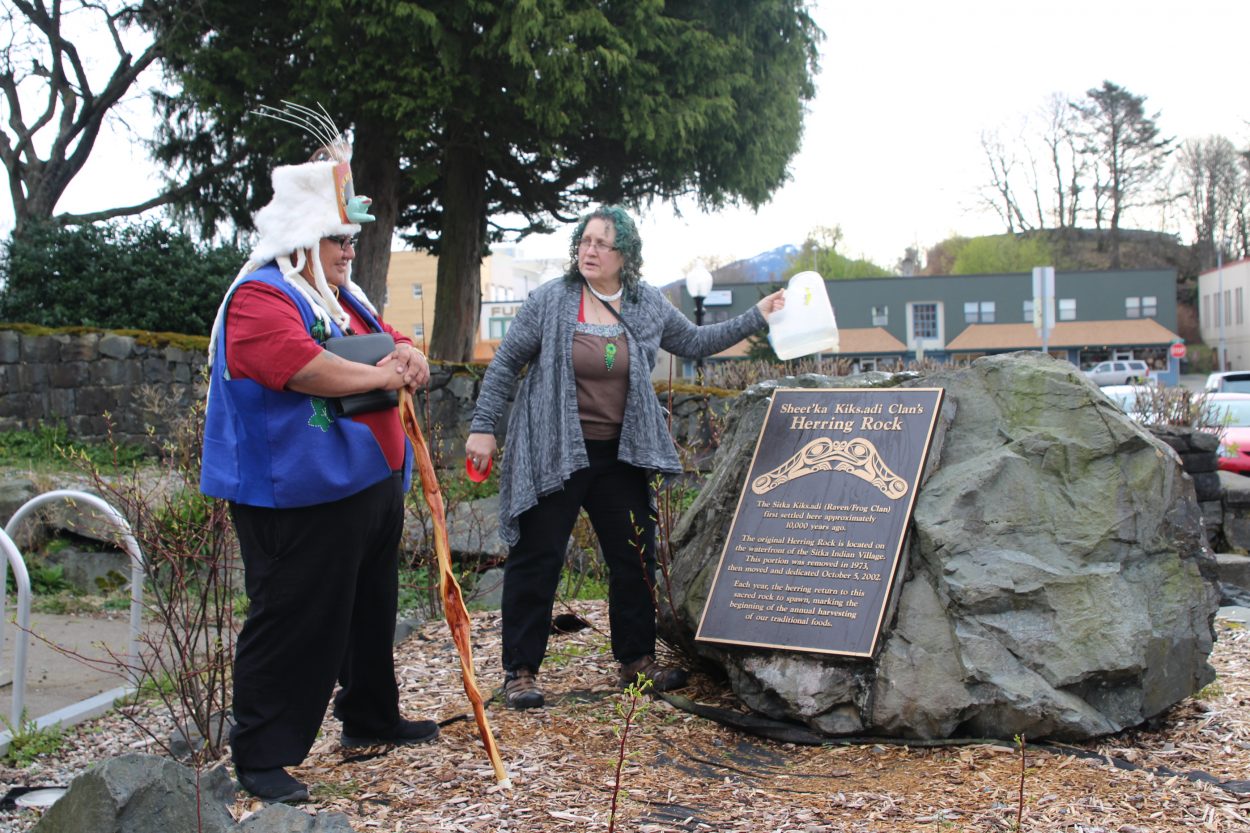 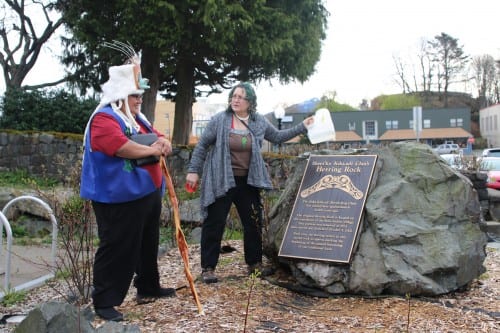 While commercial fishermen were on the water anxiously awaiting the next herring opening in Sitka, some residents gathered on land for a traditional Tlingit ceremony. The Blessing of Herring Rock happens every year to get the fish to come back to the Sound to spawn.

For centuries, the Kiks.adi clan has honored the beginning of herring season in the spring by blessing Herring Rock, which originally stood on the waterfront of the Indian Village. It was at this rock where herring traditionally began their spawn. Nels Lawson is a Tlingit elder.

“This time of year was very significant to our people because with the arrival of the herring on our shores, meant the arrival of new food, new food for our homes,” he said.

In that respect, little has changed. The small group of residents and tribal citizens are waiting for the fish to spawn to collect their tasty eggs.

However, spawning patterns have changed and the large Herring Rock has been relocated on shore. It now sits outside the Sheet’ka Kwan Nakahidi.

“We bless it so we won’t have such a hard time getting them to come back,” Moreno said. “This is one of the last places herring spawn so it’s a very important anchor for that species and for our traditions for our people to enjoy the harvest of the herring eggs.”

She says likes to enjoy her roe with seal oil and soy sauce, something she’s looking forward to after the herring spawn and the subsistence roe-on-hemlock harvest.

Roby Littlefield did the honors of the blessing this year. She poured salt water from the channel over the rock in memory of her husband John Littlefield, a subsistence activist. She says she’s fueling up her boat in preparation for the harvest.

“It’s not time to put branches in the water yet but it’s time to start looking because you never know for sure where they’re going to spawn especially with commercial harvesters pounding on them they’re running away and sometimes they scatter for a week at a time,” she said.

Competition over the herring resource has created tension between the commercial and subsistence interests. Littlefield, along with other traditional harvesters, feels that commercial fishing has a greater impact on herring than the Alaska Department of Fish & Game’s data suggests. She’s concerned about the future of the ecosystem.

“They’re at the base of the pyramid,” she said. “Everything depends on herring and so when you cut off the bottom of the pyramid you’ve got a problem.”

Patty Dick teaches sixth-grade science at Blatchley Middle School. She sees the blessing of the Herring Rock as an important tradition, one she always teaches her students about.

“There are a lot of changes that are occurring right now in our ocean and we are in the process of living through these changes and so every year that these herring return is really special,” she said.

And that’s a blessing in itself.

The Blessing of Herring Rock started Sitka Herring Festival, which continues through April 9.