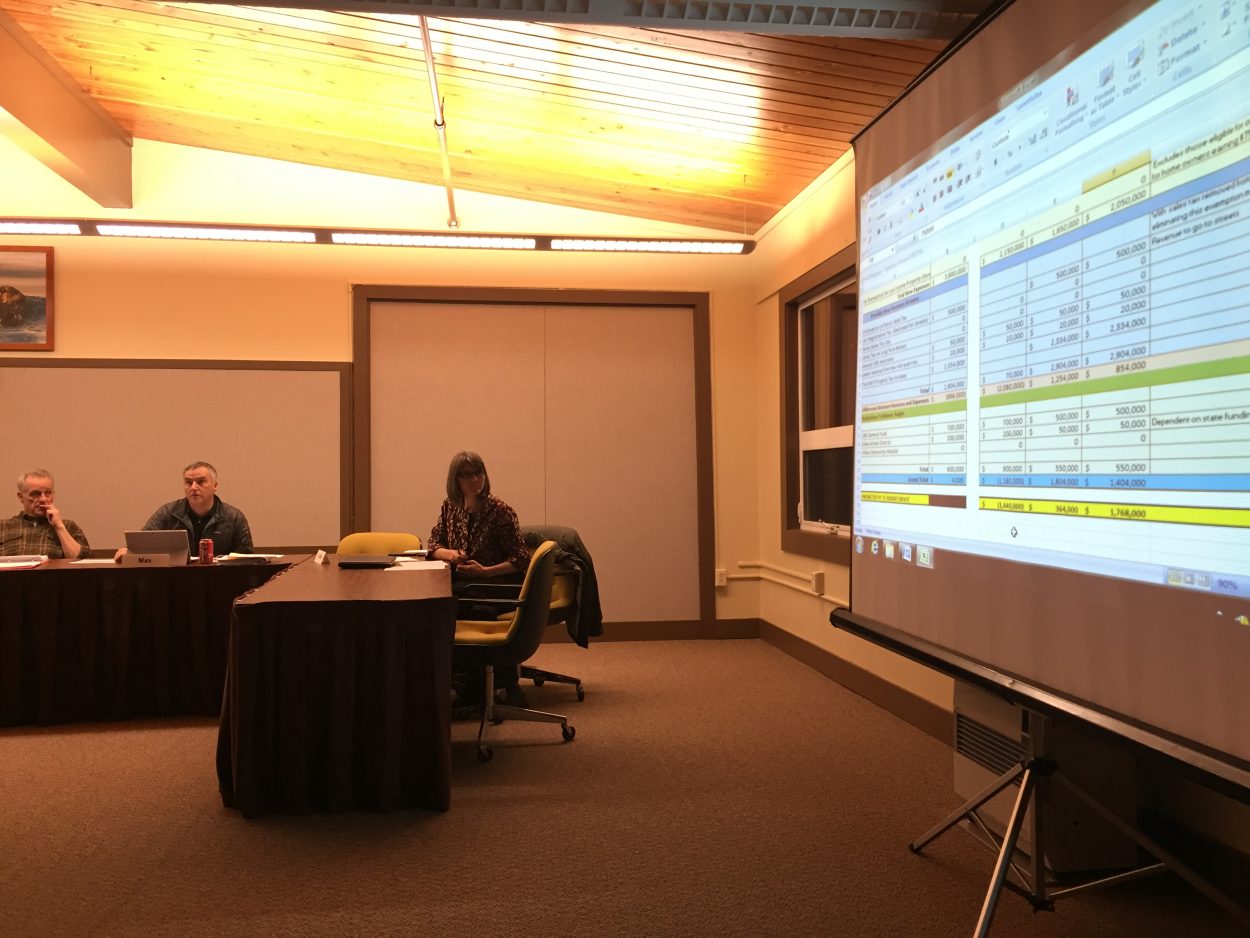 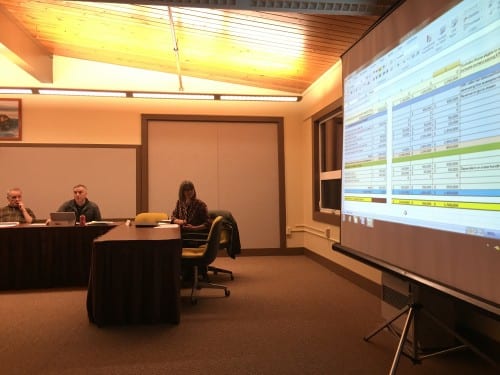 “The Grand Bargain” is a multi-tier proposal by the Task Force. Among their suggestions is a plan to raise property taxes, reduce grocery bills, and soften electricity rate hikes for the next three years. (Emily Kwong/KCAW)

After six months of scrutinizing Sitka’s budget, the Citizens’ Task Force is ready to reveal their plan. They call it “The Grand Bargain.” Here’s a glimpse of the bargain’s major line items, some of which are still a source of disagreement among the task force.

With a budget gap to close and state funding growing ever more unlikely, how will Sitka make due? The Task Force says, ‘By striking a deal with its citizens.’

This is their idea: If citizens approve a ballot initiative to raise cap on property taxes by two mills, the city will eliminate the sales tax on groceries.

At their March 7 meeting, Cyndi Gibson crunched the numbers and lit by the glow of a projector, presented her findings. “The idea is that people that have homes that are more valuable can have the resources to absorb those expenses a little bit easier,” Gibson said,  “than people who maybe have fixed income or maybe have bigger families and these other expenses.” 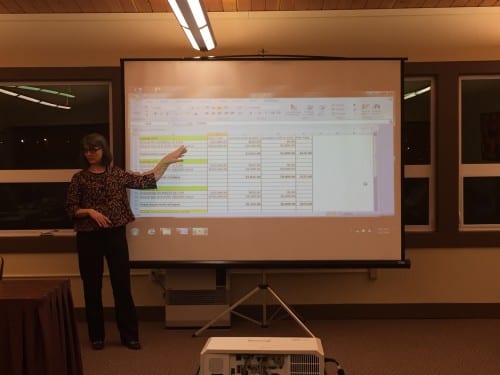 Cyndi Gibson explains that under the grand bargain, the tax burden would be shifted to Sitkans with properties that are of higher market value. (Emily Kwong/KCAW photo)

Her example compares two families. Let’s call them Family A and Family B. Each one has a mom, dad, and two kids and spends the same amount on groceries. Repealing the sales tax on groceries (which would apply only to food, not toiletries) would save each family $825 a year.

By Gibson’s calculations, this pattern also holds true for senior citizens and renters. Those who have more properties (or more highly valued properties) will pay more under this new paradigm. Task Force member Dyan Bessette worried that the burden shift would negatively impact seniors, who may have second properties but are on fixed income.

Bessette: You’re assuming seniors are a lot better off financially than other people.

Gibson: No, I never meant to imply that.

Task force members have also been divided on whether to assign these mill rates to a specific purpose. Hugh Bevan suggested dedicating the revenue from one of the mill rates towards bond payments on the expansion of the Blue Lake hydro dam. “I’m in favor of splitting it in half and dedicating one (mill) to debt reduction in the electric fund. The other I’m ambivalent about,” Bevan told the Task Force.

Vice Chair Max Rule worried that would put Sitka in a bind. He said, “If we get in to dedicating 1 mill of property tax for debt reduction of the utility, then we’re committed out there for 35 years.”

Other task force members wondered whether dedicating the mill rate to road maintenance would be a better sell to the public. But in the end, the Task Force decided to get more public input and leave the 2 mill bump undesignated for any one fund.

And speaking of the Blue Lake dam, the Task Force is also recommending a $1.9 million subsidy from the general fund to the electric fund. This is important because mild winters and low oil prices have put Sitka out of pace with bond payments for the dam. Rates will likely increase again this year and the subsidy is meant to keep that rate hike below 5%. Last year, rates increased by 6%.

On the cuts side, the Task Force is proposing a $1.7 million cut to the General Fund and $600,000 to the school district over the course of three years. They did not propose a cut to Sitka Community Hospital, which concerned Gibson at last Monday’s (03-14-16) meeting. “I kind of feel like if we’re expecting our school to cut back and our city to cut back, then the hospital is pretty big,” she said.

Hospital CEO Rob Allen is Chair of the Task Force, though he was not present at the March 14 meeting. Right now, the city has budgeted $157,000 for the Hospital, which goes towards capital projects and equipment. Rule felt this cost was too small to cut into.

Rule: That was my reason for leaving it as zero.

Gibson: That’s fine, but we need to be able to tell that to people.

Just that – “being able to tell that to people” – kind of captures the challenge before the Task Force now. They need to figure out how to tell the story of the decisions they’ve made and why they made them, seeking public input while also defending their choices. Speaking to her fellow Task Force members, Gibson said, “If we think this is the solution, it’s our job to communicate effectively enough that everybody else can understand what it’s important and why they would want to do it.”

And citizen’s aren’t their only critics. The Task Force will present their recommendations to the Assembly at a work session on Tuesday, April 12 at 5 p.m.

Listen to a half-hour “Grand Bargain” special with Task Force members Rob Allen, Hugh Bevan, and Cindy Gibson to hear about their plan in further detail.

The Task Force will gather public input on the Grand Bargain at a town hall meeting at 6 p.m. tonight (03-21-16) in room 229 at the University of Alaska Southeast.